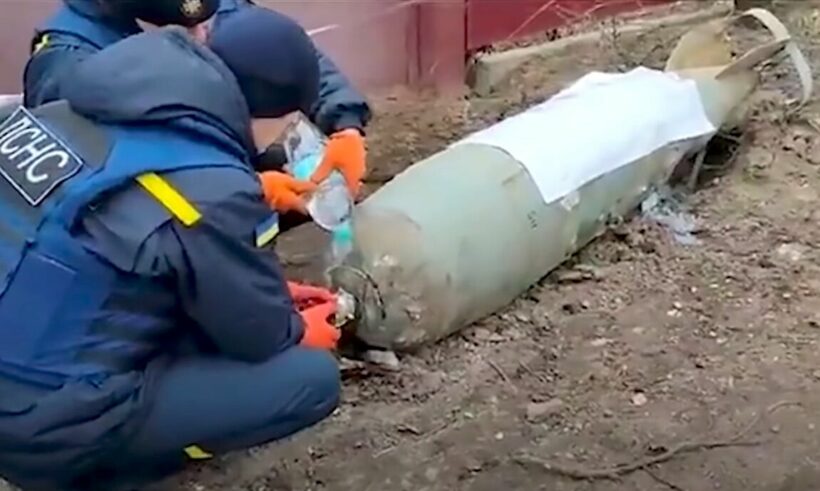 • Russian forces have begun attacking the Ukrainian cities of Lutsk, Ivano-Frankivsk and Dnipro for the first time since the invasion began.

• In a late night address, President Volodymyr Zelensky has rejected Moscow’s claims that Ukraine is developing chemical weapons. The US has also denied the claim as a false pretext for Russia to use chemical weapons in Ukraine.

• On Friday, the United Nations Security Council will hold a meeting at the request of Russia regarding its allegation that the United States is using chemical weapons in Ukraine. US spokeswoman Olivia Dalton said…

“[It’s] exactly the kind of false flag effort we have warned Russia might initiate to justify a biological or chemical weapons attack.”

“Russia has a well-documented history of using chemical weapons and has long maintained a biological weapons program in violation of international law. Russia also has a track record of falsely accusing the West of the very violations that Russia itself is perpetrating.”

• Peace talks between Ukrainian and Russian foreign ministers in Turkey has ended without progress toward a ceasefire. Ukraine’s Foreign Minister Dmytro Kuleba met Russian counterpart Sergei Lavrov for the first high-level talks since Russian’s invasion began. Lavrov demanded Ukraine disarm and adopt a neutral position, which Kuleba said was liken to wanting a surrender. Despite not coming close to reaching a peace agreement, the two agreed to continue discussions.

• Facebook and Instagram have changed their hate speech policy to “temporarily” allow calls for violence against Putin and Russian troops. According to internal emails, Meta Platforms will allow Facebook and Instagram users in select countries to call for violence against Russians and Russian soldiers in context of the Ukraine invasion, Reuters reported. According to internal emails to content moderators, the social media company is also temporarily allowing some posts that call for death to Russian President Vladimir Putin or Belarusian President Alexander Lukashenko in countries including Russia, Ukraine and Poland.

• The International Committee of the Red Cross warns that food and water supplies in the besieged port city of Mariupol are running dangerously low. Three people, including a child, were killed in Russian air strike on a maternity and children’s hospital in Mariupol on Wednesday. The deadly Russian bombing on pregnant women and sick children has sparked international outrage. President Volodymyr Zelensky said it was “proof of a genocide,” and repeated his call for NATO to declare a no-fly zone over Ukraine.

• The UK is imposing financial sanctions on Chelsea FC owner Roman Abramovich, a well known Russian oligarch and ally of President Valdimir Putin. Meanwhile, the football club has been granted a special licence to keep playing. The club is not permitted to sell tickets and merchandise, or buy and sell players.

• In the past 24 hours, Russian forces have moved 5 kilometers closer to Kyiv. Meanwhile, new satellite images show the 40-mile-long Russian convoy near Kyiv has mostly disbanded as the fight for the Ukrainian capital continues.

• European Union member states held an emergency meeting in Versailles to discuss the war in Ukraine, as well as “fast-track” membership for Ukraine, after Zelensky requested immediate EU membership. However, member states voted against admitting Ukraine while it is at war with Russia. French President Emmanuel Macron said…

“Can we open a membership procedure with a country at war? I don’t think so. Can we shut the door and say: ‘never’? It would be unfair. Can we forget about the balance points in that region? Let’s be cautious.”

• Meanwhile, Berlin says it’s struggling to accommodate the influx of Ukrainian refugees, as it plans the construction of five new refugee camps. The city’s mayor said…

“We knew since the first of the invasion that there would be a large number of refugees, and many of them would come here. We cannot know how many there will be.”

• US lawmakers have approved a massive spending bill that would rush USD 13.6 billion in humanitarian and military aid to Ukraine and its European allies.

• About 100,000 people were evacuated via humanitarian corridors in several parts of Ukraine over the past two days, Zelensky said Thursday.

CamPat
Ukraine's Biolab. WHO advised Ukraine to destroy everything there. Here is a bit of more solid info why this subject is getting off the rail in the western media. Now they claim that Russia plans to use Bio Weapons against…
oldschooler
7 hours ago, Fester said: So do I. Much of the head of this column was attacked and damaged, at least. There are reports of dispersion and redeployment of elements of it but there is not consensus on how much…
oldschooler
10 hours ago, Thaiger said: • Peace talks between Ukrainian and Russian foreign ministers in Turkey has ended without progress toward a ceasefire. Ukraine’s Foreign Minister Dmytro Kuleba met Russian counterpart Sergei Lavrov for the first high-level talks since Russian’s…
Fester
1 hour ago, oldschooler said: Convoy cannot move on or off the road so clearly can’t be “ dispersing “ or “ redeploying” …. Oh you mean turning off onto roads going away from Kyiv perhaps or reaching Kyiv via…
CamPat
WHO defuses claims of Chemical Weapons Thread. EXCLUSIVE WHO says it advised Ukraine to destroy pathogens in health labs to prevent disease spread March 11 (Reuters) - The World Health Organization advised Ukraine to destroy high-threat pathogens housed in the…