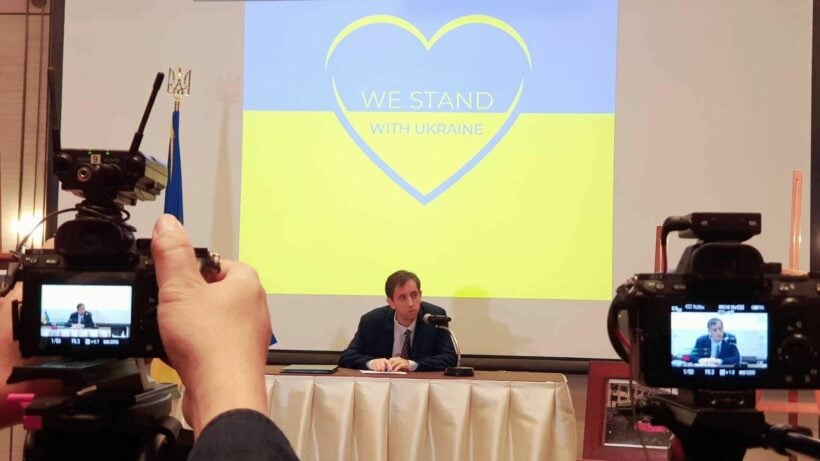 The charge d’affaires, Oleksandr Lysak, said Thais have also donated over five million baht to help Ukrainians. He stressed the importance of transparency in donations, and said they are sent to the National Bank of Ukraine. He added that transfers can be tracked.

“We will put the updated figure of our donations on our official information resources, so people can track where their money goes.”

Lysak said the Ukrainian Embassy asked the Thai Immigration Bureau to consider granting visa extensions to Ukrainians unable to return home. He said the embassy is making a QR code with Thai banks so Thais can more easily help Ukrainians.

One tourism school is also helping Ukrainians, as well as Russians in Koh Samui stay at a hotel for just 4,000 baht a month. Also in Koh Samui, one villa owner also cut his accommodation fee by 50% for a Ukrainian couple unable to return home because of violence. The couple only intended to stay on the island for a week but have since stayed in the villa for two weeks.

Totoro
Sure they are Thai? Not Myanmese?

Noble_Design
Stranded Ukrainians in Thailand (picture for illustration purposes only):

Guest1
2 hours ago, Thaiger said: Oleksandr Lysak, said Thais have also sent over five million baht to help Ukrainians. He stressed the importance of transparency in donations, and said they are sent to the National Bank of Ukraine. Ehm, wouldn't…

palooka
Think there may be a subtle message here for the Thai govt. Pity they don't understand subtlety or nuances.
HiuMak
16 hours ago, Thaiger said: He said the Ukraine launched a website to provide free accommodation to Ukrainians stranded abroad. Thais submitted over 100 proposals on the site. The charge d’affaires, Oleksandr Lysak, said Thais have also sent over five million…