It’s open again. Boracay Island, forced to close after being described by Philippine President Duterte as a ‘cesspool’, has undergone a major makeover of infrastructure and opens with new rules to help control tourist growth in the future.

Tourists flooded back onto the island today as the island re-opened. Suffering the same problems as Maya Bay and southern Thai islands, Boracay Island had been suffering for years under the burden of too much tourist-love but without the necessary infrastructure to contain the growth. At its peak Boracay Island was attracting two million visitors a year, well above its ability to maintain services.

Under a new set of rules the Boracay beachfront has been cleared of the masseuses, bonfires, beach vendors and sunset bonfires. Even the builders of its famous ‘selfie’ sandcastles have been cleared away.

Buildings have been bulldozed and beach businesses set back to create a 30 metre buffer zone from the waterline.

Many hotels and restaurants have been shut down because they didn’t meet the new standards and less that 160 tourism-related businesses have been approved to open their doors again.

All water sports have also been banned for the time being.

The island also had three casinos but they’ve also been shuttered whilst their future is being considered by Duterte.

The new rules have also determined that only 19,200 tourists will be allowed on the island at any one time. The government says they will be able to enforce that by controlling the number of hotel rooms available for bookings.

Additionally, drinking or smoking on the beaches are now banned and the huge beach parties dubbed “LaBoracay”, that would draw thousands of tourists during May each year, will not be operating in the future.

Tens of thousands of island workers were left without employment when the island was closed down six months ago. Many welcomed the re-opening of the island and hope its days as a ghost-town island are over.

Some of the new rules. Please note “Don’t vomit in public!” 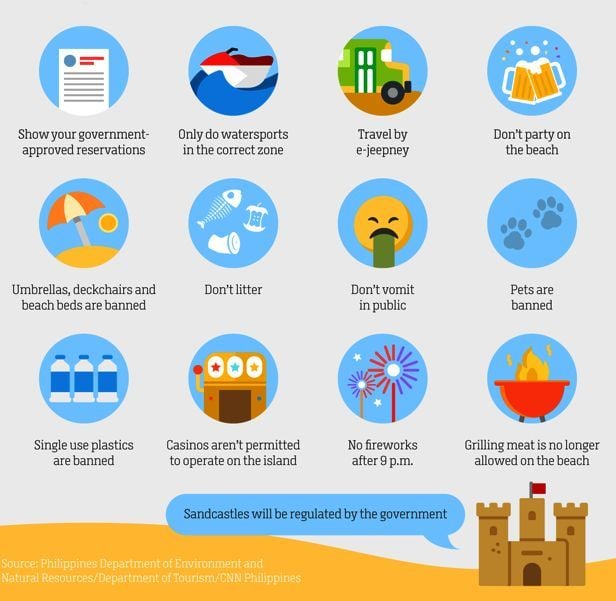 The government gets a 'rap' on the knuckles