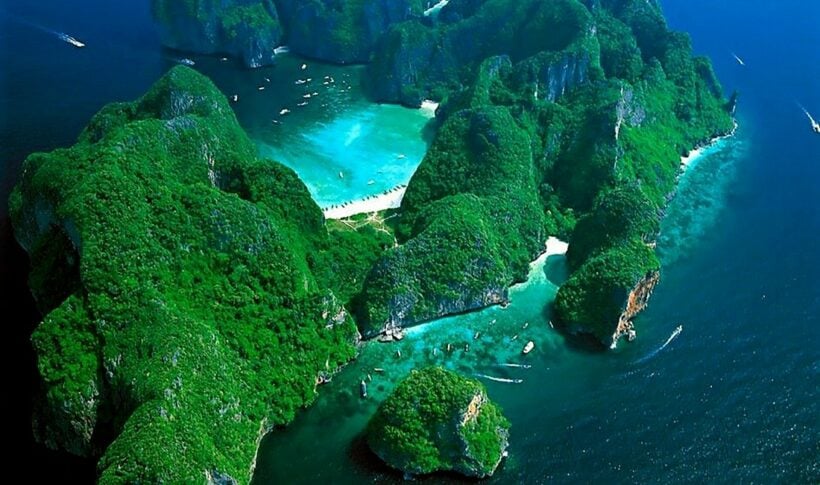 The island, Koh Phi Phi Ley, made famous by the movie “The Beach”, is due to get a complete makeover as part of a new project designed to protect the environment and the ocean.

As I step out of the boat on the shore of Maya Bay, my brain goes into overdrive. Where, I ask myself, is the tranquil beach that I fell in love with five years ago? Has it been replaced by the waterpark at Bangkok’s Siam Park City? It certainly looks that way as hundreds of Chinese tourists splash around happily and loudly in the clear turquoise waters while others crowd the 400-metre white sand beach in a selfie-taking frenzy.

The front of the bay seems to have morphed into a boat expo with turbo speedboats and classic long-tail boats jostling for position and for business too, their owners shouting out offers for sightseeing and marine tours.

Looking around me with something close to despair, I can understand why Maya Bay is being closed from June 1 to September 30 for rehabilitation and a major makeover that should bring about better tourism management.

The bay will be capitalising on the success of the Phi Phi Set to Change Project, a collaborative effort by Hat Noppharat Thara–Mu Ko Phi Phi National Park, veteran marine ecologists Thon Thamrongnawasawat and Thaithaworn Lirdwitayaprasit and Singha Estate to turn Phi Phi Island into a model of sustainable tourism.

In 2016, this initiative led to the closure of Yung Island and the National Park and its designation as a Strict Nature Reserve Zone to preserve coral reefs and prevent coral bleaching. Focusing on the International Union for Conservation of Nature’s nature-based solution, the expert team has used reef propagation techniques to recover and restore the ecosystem while simultaneously controlling the numbers of tourists and vessels in Loh Ba Gao Bay and Koh Phai. Today Koh Yung has come back to life.

Coral bleaching is down by 10 per cent and the reefs have expanded from 1,300 to 1,480 square metres along the beachfront. 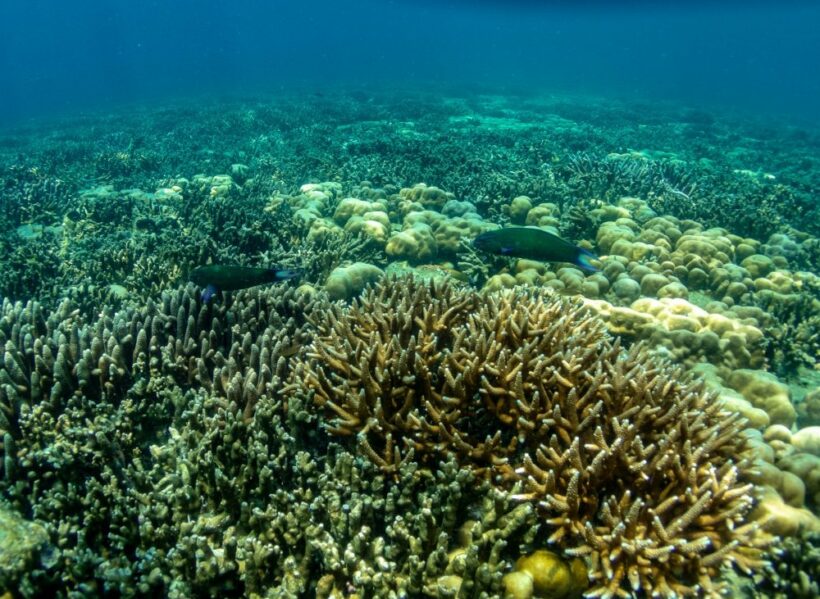 “This is part of the national strategy on sustainable growth and the national reform of the environment and natural resources. We picked Phi Phi Island as a model because it was such a hopeless site. Three years ago, Koh Yung had less than five per cent of coral reefs and was just a spot for tourists to feed the fish,” says Thon, deputy dean of the Marine Science Department at Kasetsart University and a member of the national strategy and national reform committees on sustainable growth and the environment and natural resources.

“Tourist boats gathered sand from the beaches and dropped them over the corals while moving in and out. Meanwhile, they wiped out the coral reefs when anchoring underwater. To solve this problem, Singha Estate has provided us with mooring buoys to create a park-and-ride spot for the tour operators.

“In some areas of Koh Yung, we find the coral reefs are increasing from five to 80 per cent. We’ve joined forces with local residents, restaurateurs and other business owners to launch the ‘No Shark, No Parrotfish Sold Here’ campaign,” he adds.

At depths ranging from one to 12 metres, Koh Yung now boasts a diversity of coral reefs such as acropora, diploastrea, favia, davits, fungia, heliopora, montipora, physogyra, pocillopora and porites, making it a striking learning centre for marine ecology.

“The Quick Growth project aims to educate the communities and entrepreneurs on how to reduce impacts from the tourism industry and conserve the biodiversity of Hat Noppharat Thara – Mu Ko Phi Phi National Park.”

Part of the Quick Growth project, the grey mangrove trees are planted around Baan Laem Village, using saplings provided by the Biodiversity-based Economy Development Office to regenerate the marine ecosystem. Singha Estate has supported Kasetsart University in conducting a project that sets out to restore and monitor the coral reefs in the park with drone-enabled aerial photography as well as propagate corals in Maya Bay. Using drones, the rehabilitation of marine resources will be tracked continuously and sustainably, in line with the national strategic plan for coral reef restoration of the Ministry of Natural Resources and Environment.

The project has teamed up with the Sea Shepherd Conservation Society to turn some areas of Loh Ba Gao Bay into a nursery ground, using hanging techniques at depths of four and seven metres to propagate corals, which will be moved to Koh Yung and Maya Bay when they’re strong enough.

“We’ve collected broken pieces of live corals and cut them off before reattaching them to the rocks with glue. We also use a few drop of catalyst to help boost their growth and protect them from disease. We have discovered more than 80 kinds of corals around Phi Phi Island,” Thon says.

Maya Bay’s tourism management makeover in collaboration with the Phitak Phi Phi (Protecting Phi Phi) group is scheduled to operate for a year. It will permanently close the front of the bay, resulting in transportation shifting to Loh Sama Bay at the back of the island. The Marine Nation Parks Operation Centre 3 is responsible for building a top-quality plastic-based pier and bridge to transport tourists as well as developing the e-ticketing application to cut the number of tourists from almost 4,000 to 2,000 a day.

“We’ve been generating income of 3 billion baht a year, but we don’t have a specific figure for enhancing the tourism management. It’s a worthwhile investment though and Phi Phi Island will be a model, focusing on one-day trips to Koh Poda, Talay Waek, Maya Bay and Koh Mai Phai. We’re developing smart e-ticketing software to control the volume of tourists and boats, which will link with 132 natural marine parks such as Similan, Tarutao, Chang and Samed islands,” says Ariya Chouchom, director of the National Park’s development division.

“We plan to spend 10 million baht building a plastic water-based pier for Maya Bay and improving other facilities and security. The pier will be equipped with electronic gates for the e-ticketing system. Meanwhile, we’re pulling down all accommodation in the Similan Island National Park – that means tourists won’t be allowed to stay overnight on the islands anymore.”

During Maya Bay’s closure, visitors can explore the underwater world of Phi Phi Island at the brand-new Marine Discovery Centre, which is run by Singha Estate. Located in its five-star Phi Phi Island Village Beach Resort, the 10 million baht marine centre occupies 440 square metres and houses four stunning exhibition rooms that portray the importance of the marine ecosystem and the roots of Phi Phi Island.

Young visitors will love the Shark Room, where the biology and ecosystems of different shark species are displayed. There’s even a nursery tank for injured baby sharks, which have been caught in trawls and wounded, where they are left to recover before being released back into the ocean. The Phi Phi Islands Room showcases all attractions in Hat Noppharat Thara–Mu Ko Phi Phi National Park as well as a map of diving sites such as Mai Phai Island, Poda Island, and the separated sea in Maya Bay. 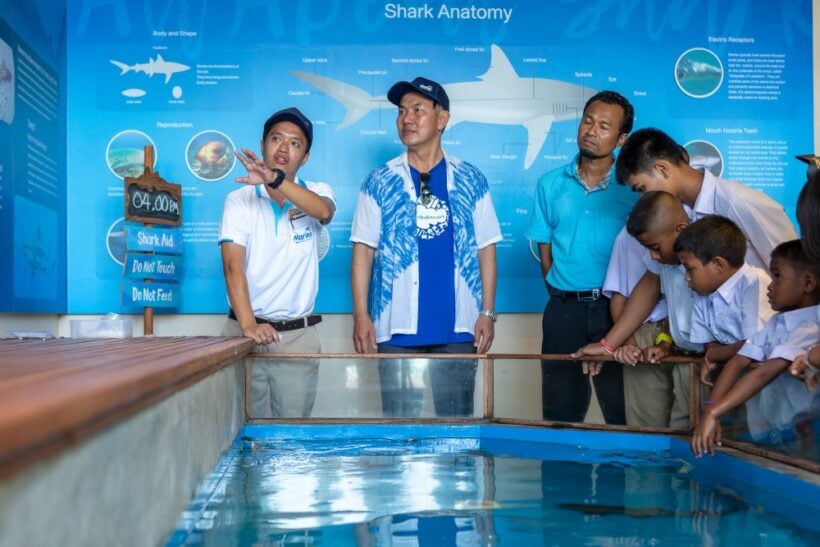 The Clownfish Room is popular with amateur biologists both old and young admiring the tanks of different clownfish species found in Thailand. It also offers interactive games about clownfish for children and a laboratory for clownfish breeding, as well as coral planting and clownfish release activities.

The auditorium serves as a venue for lectures on marine ecosystems and other training sessions for students who are on camping trips in the national park.

“The Marine Discovery Centre will serve as a model for other future marine learning centres that Signha Estate will develop both in Thailand and Maldives. We try to create some new activities and content to raise awareness of environmental conservation,” Naris says. 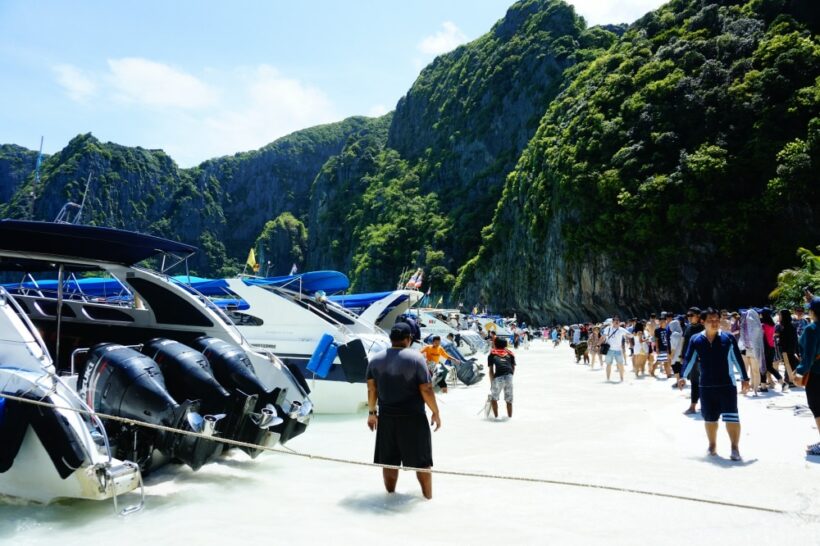 Officials call for help in the search for the whale shark