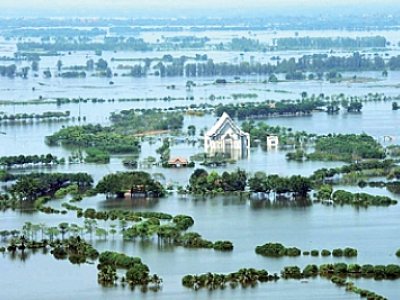 PHUKET: Property and families have been destroyed by the recent floods in Thailand. What is Mother Nature trying to tell us?

When I flew across the Pacific some weeks ago, the final descent took us over the central plains of Thailand. Looking down, there was water as far as the eye could see.

It was a scene awash in melancholy: paddy fields and roads submerged out of sight, whole settlements isolated by flooding, and the few trees in the landscape were up to their boughs in water.

We all know the power of this inundation: now more than 600 people are missing, hundreds of thousands rendered homeless and destitute, the livelihoods of countless farmers gone. The financial cost is massive; the human cost incalculable.

And who is to blame? While attention in the national media has focused on the slow and indecisive action on the part of politicians, illegal building across canals, on “dams and water management designed for an older era”, few have judged the actual storms to be anything other than a natural catastrophe, an occurrence, like earthquakes, hurricanes and droughts, to be expected. Hardly anyone has attributed any blame to greenhouse gas emissions or global warming; to man’s mismanagement of the planet. But it is worth noting that the average annual rainfall for Thailand has gone up steeply from 1,200mm a few years ago to over 2,000mm in 2011. Pure coincidence? Maybe, but one thing is certain, if you tamper with Mother Nature, sooner or later, she will get her own back.

We are living in an era where climatic patterns, particularly in tropical regions, have been rendered unstable by an atmosphere struggling to deal with its highest concentrations of carbon dioxide in 600,000 years.

Although the jury may still be out on the effects of global warming on rainfall, it looks increasingly more likely that there is an effect. Put crudely, warm air holds more moisture than cooler air, and this causes heavier precipitation. What is accepted by ecologists everywhere, is the almost irreversible impact of global deforestation. If Thailand’s recent rash of floods has a root cause that predates the mismanagement of its rivers, dams and canals, it resides in its systematic destruction of rainforest.

Thailand’s recent record is lamentable and a consequence of cultivating cash crops, commercial logging, forest fires, industrial and urban development. From 1945 to 1975 Thailand lost 28.4 per cent of its forest cover; between 1975 and 2005, about 60 per cent of the remaining primary rainforest was lost.

The effect of this on the atmosphere is tangible. After all, the foliage of trees filters out huge amounts of carbon dioxide during photosynthesis, and also releases life-enhancing oxygen into the environment. Cut the trees down, and oxygen levels will be seriously depleted. Worse, if you use slash and burn techniques,most of the stored carbon will be released back into the air. It is estimated that tropical deforestation discharges 1-5 billion tonnes of CO2 into our polluted atmosphere every year.

Arboreal degradation does not help. Replace tropical bio-diverse forests with a mono-specific cash crop such as rubber trees, oil palms or – as has happened in north Thailand – with eucalyptus, and most arboreal benefits will disappear. Such crops drain the same nutrients from the soil time and time again eventually depleting these plantations, which may become arid.

However, there is another affect of deforestation that is precisely relevant to Thailand’s present watery problems. Trees are nature’s way of coping with saturated earth and too much water. Their canopies act as spongy umbrellas, soaking up much of the rain as it falls, and slowing down the process of surface run-off.

The water that does reach the ground is quickly absorbed, first by organic matter such as leaf litter and then by root systems. These roots both take up moisture, and create channels in the soil, which increase the rate of absorption of water. Better still, a living tree “breathes” by a process known as transpiration, thus gradually returning 99% of this retained moisture back into the atmosphere.

Trees have one other crucial function. Their roots help to bind and retain soil, especially precious, humus-rich top soil. This layer of soil is usually thin and often conceals rock beneath. Protected by rainforests, the rate of top-soil erosion is low, but in areas denuded of trees the rate is high.

When trees on steep slopes are removed (often illegally) by loggers or so-called property developers, the effect is to make whole hillsides prone to rock slips and landslides.

A warning note was sounded during the heavy rains of 1988, when whole areas of Khao Luang mountain in south Thailand, partly cleared to make way for a rubber plantation, crashed down on the villages below. Several hundred inhabitants were killed.

I live in Phuket because it is a mountainous island and because secondary rainforest still covers most of its uplands. Phuket has escaped serious flooding during the recent heavy downpours. However, where hillside trees have been uprooted in the name of “progress”, such deforestation has resulted in mud-slides, which have caused considerable damage, and threatened to engulf the properties below.

And it is not just the landscape that has suffered here. Much of this liquefied soil or silt finds its way onto beaches and worse, into the sea, where the run-off creates huge slicks of suspended particles of mud.

Coral, along with its precious micro-organisms, undisturbed for aeons in limpid seas, is suddenly engulfed by suffocating clouds of silt. It dies.

But in parts of northern and central Thailand, in the plains of the rice belt and beyond, the problem is incomparably worse. Too few trees to help mop up the surplus water, to absorb all that excess moisture and gradually return it to the atmosphere. Only flooded roads and paddy fields, swollen, silted waterways, and sodden settlements.

Mother Nature is not a respecter of persons or resources. The inevitable breaching of Bangkok’s defenses was only a matter of time. One of the world’s great citadels has failed to keep her fury at bay.

A call to arts: ThinkDesign Art Festival at the Royal Phuket Marina