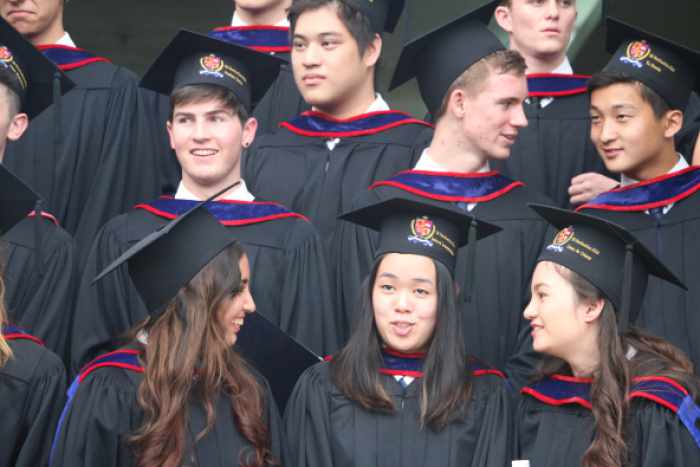 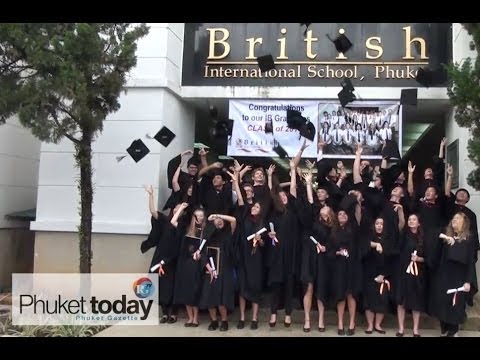 PHUKET: Hope and nostalgia, vivid memories and plans for a bright future, words of inspiration and inside jokes, bright smiles and rivers of tears – all this was present in abundance during the British International School Phuket (BISP) Graduation Ceremony for the Class of 2014 on Tuesday, May 27.

Honored by the Governor of Phuket, Maitri Inthusut, British Honorary Consul in Phuket Martin Carpenter, representatives of the Ministry of Education, and a number of local VIPs – the ceremony saw 29 BISP students celebrate this important milestone in their young lives.

The inspirational keynote speech was delivered by BISP alumnae, Assistant Managing Director at Manmeebooks, Kim Chongsatitwatana. Her speech provided plenty of motivation, not only for the graduates, but for all the guests, parents and teachers who filled the school’s vast auditorium. Asking the students to keep their hearts open and warning them against arrogance, she used quotations from the likes of Cicero to convince the graduates to “make a difference” and work for social change.

But perhaps it was the speeches by the students themselves, namely the Head Boy and Girl students, Luke Phillips and Bao Han Tran Le, that won the audience’s warmest reception. Sharing common memories of campus life with their schoolmates, Luke and Bao touched the hearts of their friends while reminding them “not to lose themselves” in their constant strive to move forward.

And forward they will go. This year’s graduates will continue their education in universities around the globe – the UK, Sweden, Singapore, Korea, Australia, the US and elsewhere – in fields ranging from fashion design and hospitality management to psychology and bio-medicine.

Did their experiences at the school prepare them for grown-up life? For Luke Phillips the answer is yes. “The broad syllabus helps a lot. You take math, you take a foreign language, you take English and humanities, and it really helps you become a well-rounded individual,” he said.

His friend Bao Han Tran Le agreed, adding that being the Head Student was of great benefit too. “We had to be good role models for the younger kids, which taught us how to conduct ourselves, how to speak in public and more.”

The confidence with which she delivered her graduation speech proved she’s right, but is it enough to improve the world we live in? Cautious optimism best describes Bao Han’s reply.

“Changing the world is such a grandiose idea, I believe we should start by improving ourselves, and then our communities, which is at this time Phuket, and then Thailand and only then the world. But maybe 10 years down the line, you’ll see me changing the world,” she said, smiling.

However, it wasn’t the distant future that occupied the young minds the most that day, but rather the past memories of their school years.

“I’ve been here for 13 years, all of my schooling life,” said Luke, “This school is the only place I really know – so I’m excited to visit new places and explore new opportunities, but I’ll miss this familiarity,” he explained.

Both Luke and Bao Han didn’t spare kind words when talking about their BISP experience.
“From outside it looks like a really big school, but once you’re in, you understand that the small student-to-teacher ratio really helps you become an individual. You’re not just one of many in the class,” said Luke, while Bao added that the endless opportunities for personal development that the school provides is what makes it special.

On stage, prizes were awarded to the most hardworking of the IB students, including the Theory of Knowledge award for Liam Kealy, Extended Essay award for Nathanon Khanijow and Valedictorian award for Piers Grassman, among others. After the ceremony, food was served in the school hall and soon after, mortarboards flew high into the air. The BISP Graduation Ceremony has ended, but for the graduates, the future has only just begun.

Hold on to your skirt!