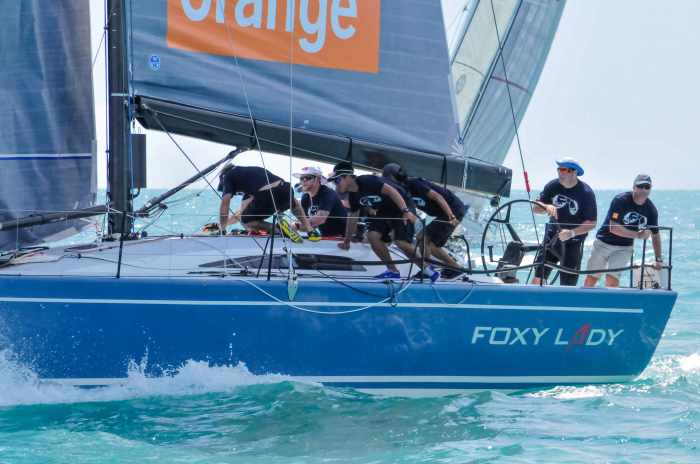 PHUKET: The sun and wind greeted sailors with equal measure on the morning of the last day of the Samui Regatta last Saturday, May 31. With the best pressure to the north, Principal Race Officer (PRO) Ross Chisholm headed out to lay a start line with two races planned for all – first a trapezoid course followed by a fast and furious final windward/leeward to close out the series.

First up were IRC Zero and with Jelik and HiFi tied, and Oi! Just one point back coming into the final day, IRC Zero was open for the taking. Like a crew on a mission, Jelik were off and around the course in double quick time to add another line honors to their haul, but the distance between them and the rest of the fleet just wasn’t enough, and they had to settle for third on corrected time.

Winning the battle of the TP52’s was the Ahern/Bailey/Wilmer Oi! whose second across the line converted to a second place on corrected time in Race 1, just 15 seconds shy of the winner, Neil Pryde’s HiFi.

Elsewhere in IRC One, Bill Bremner and his crew on Foxy Lady VI had essentially sewn up the class the day before, barring any major mishaps, and the final day battle was for pride and the not-so-easy-to-get final win and point they needed to secure the 2013/14 AsianYachting Grand Prix championship.

The race turned into a battle of the asymmetrical vs the symmetrical and whichever way your persuasion, no-one can argue with the closeness of the racing – just 24 seconds separated the top three on corrected time at the end of Race 1 on Saturday. Anthony Root and his crew on Red Kite II placed third behind the vastly improved Jessandra II, skippered by Red Bull Racing Australia Principal Roland Dane. And by just two seconds, it was the Mills King 40 of Bill Bremner, Foxy Lady VI, that squeezed out the tightest of wins and with it secured the class title for a second consecutive year. That makes it seven wins in a row on the AYGP circuit for Foxy Lady VI – a record that could take a long time to beat.

There was similar domination by Gary Baguley’s El Coyote in IRC Two with five wins from seven races under IRC heading into the final day. Another win in Race 1 put them in an unbeatable position. The smallest boat in the fleet, Mick Grover’s Moon Shadow, however, pushed them hard and came into their own placing second ahead of the all-Thai crew on Sansiri, lead by Patinyakorn Buranrom.

Scoring the IRC Two class under the NHC Performance Handicap system, it was Moon Shadow who beat El Coyote with Sansiri again in third.

After getting IRC Zero off on Race 2, the winds decided enough was enough and dropped out, turning the racecourse into a parking lot, and with that the PRO had no option but to abandon the race. With no wind to be found anywhere the racing was called off for the rest of the day. The fleet was sent ashore and the 13th Samui Regatta was over. All except the partying.

Coming into the Samui Regatta, Bill Bremner’s Foxy Lady VI was trailing Anthony Root’s Red Kite II by 18 points in the 2013/14 AsianYachting Grand Prix championship (AYGP). If they were to unseat Root and Red Kite II, Bremner and his crew needed to win eight races and the class title. With 10 races scheduled, it was a tough task. Made all the more so by the caliber of the competition at the Regatta. To their credit, they never lost focus and notching up wins one-by-one, often by mere seconds, it came down to the last race which they won by just two seconds. The AYGP has never been closer.

Bremner joins the company of AYGP winners over the years – some of the region’s best yachtsmen: Ray Roberts, Neil Pryde, Peter Ahern and Frank Pong – in the yachting “Hall of Fame”.

Did you win a private Phuket airplane ride?