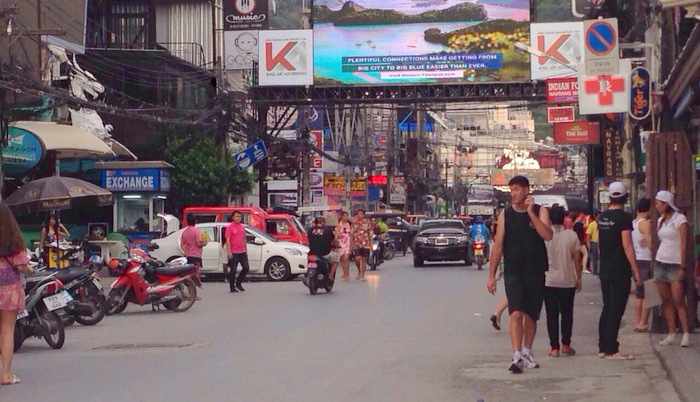 PHUKET: About 100 Patong business operators and their staff plan to gather at Phuket Provincial Hall tomorrow to submit a formal request asking for the curfew to be lifted.

The National Council for Peace and Order (NCPO) and Phuket Governor Maitri Inthusut have been informed of the plan, Patong Entertainment Business Association Weerawit Krueasombut told the Phuket Gazette this morning.

“We are thankful to the NCPO for finally stopping the endless street protests [in Bangkok]. Tomorrow, we will gather to ask the NCPO for sympathy.”

The plan to mass at Provincial Hall contravenes the NCPO’s ban on all public gatherings of five or more people calling for action by any administration.

“At first we were afraid, and we were thinking of only about 10 people forming the group,” Mr Weerawit explained.

“But we contacted the NCPO and Phuket officials, including the Damrongtham Center [local ombudsman’s office], and we were told that we must do something to bring attention to our plight and that a larger group would probably be more effective.”

Mr Weerawit highlighted that Phuket had a long-standing reputation as a province not plagued by political rallies.

“As we all know, Phuket has no political violence, and we are a very long way from Bangkok,” he said.

“Phuket needs the curfew to be lifted. We do not want tourists to be scared of coming to Phuket.

“I know the NCPO is concerned about the impact on tourism, and in my opinion the sooner the curfew is lifted, the better.”

The move to seek clemency over the curfew follows the announcement of martial law on May 20 resulting in an immediate 20 per cent fall in the number of tourist arrivals, as reported by the Ministry of Tourism and Sports last week (story here).

The ensuing coup on May 22 resulted in a 10-20 per cent drop in the number of hotel bookings in Phuket, TAT Phuket Director Anoma Wongyai confirmed to the Gazette on Friday (story here).

The curfew alone has particularly hurt nightlife operators in Patong, where the initial ban on being outdoors between 10pm and 5am cost the resort town an estimated 10 million baht a night in trade (story here).

Only seconds in it on final day of Samui Regatta