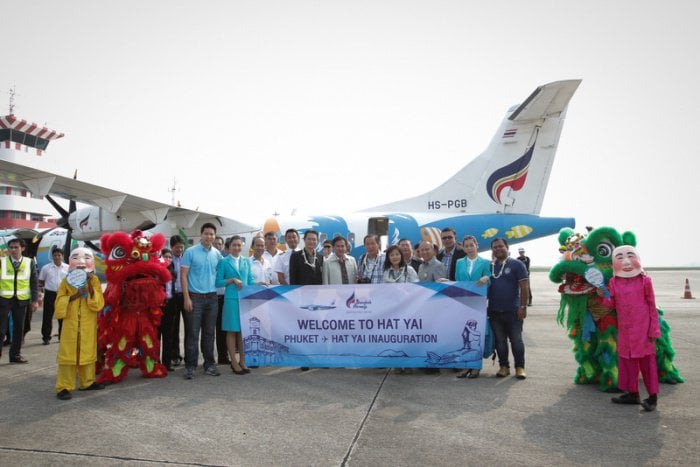 As previously reported by Up in the Air, the link between south Thailand’s two busiest airports is long overdue. There are thousands of people from Songkhla and surrounding provinces who have been clamoring for an airline to resume a service linking the two cities. The route is also expected to be a boon for visa runners from Phuket needing to get to destinations like Penang in Malaysia.

Until now, many people wanting to avoid the six-hour ride between the two locales had to fly more than 1,000 kilometers north to Bangkok then get a return flight south.

The new service, which costs 1,890 baht all inclusive, has a flight time of just less than one hour.

The last carrier to try the route was now-defunct Happy Air, which in late 2009 tried to launch a triangle route connecting Phuket, Hat Yai and Langkawi Island in Malaysia.

The flights are operated using an ATR72-500/600 aircraft, with seating for 70 passengers. The Phuket to Hat Yai flight departs from Phuket at 7:25am; the return leg departs from Hat Yai at 9:10am and arrives in Phuket at 10.15am.

“Bangkok Airways foresees the potential of Phuket and Hat Yai as prominent destinations for leisure and business. Phuket is recognized as one of the world’s most famous tourist attractions, which millions of travellers from all over the world have visited. Hat Yai is a major commercial city of southern Thailand and a gateway to Malaysia and Singapore. This new service between Phuket and Hat Yai will certainly enhance the growth of tourism and economy due to the convenience and ease of travel.”

On the other hand, Emirates has announced it will begin a twice-daily service from Dubai to Phuket starting on December 1 and has now entered a codeshare agreement with Bangkok Airways.

Jabr Al-Azeeby, Area Manager for Thailand and Indochina, said the new flights were in direct response to expected strong demand in the upcoming high season.

“By introducing a double daily service to Phuket we increase convenience and flexibility for residents of Phuket and the southern region of Thailand, making it easier to connect to Dubai and the rest of the world. This newly added service will complement our recent codeshare agreement with Bangkok Airways, offering ease of connection from different cities across Southeast Asia to and from Dubai and providing a smoother, more convenient travel experience.”

The new outbound flights will depart Phuket at 9:30am and arrive in Dubai the same day at 1:20pm local time. The return flight will operate four times per week, departing Dubai at 10.55pm and arrive in Phuket at 8am the following day.

Emirates flies 42 times a week to Bangkok and from December 1, four of the six daily flights to Bangkok will be served by an A380.

The airline’s codeshare agreement with Bangkok Airways has also added a total of 14 new destinations to the Emirates global network.