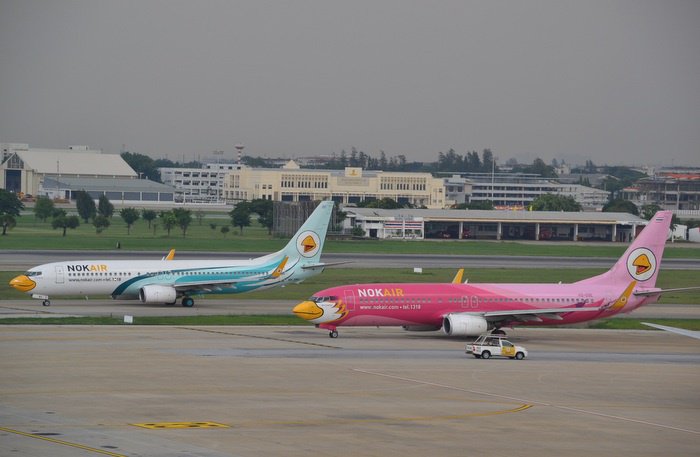 PHUKET: Low-cost carrier Nok Air hopes to better tap into the potential of Phuket’s large foreign market over the next high season, an executive told the Phuket Gazette recently.

Pinyot Pibulsongkram, a Nok Air Vice President, told ‘Up in the Air’ that Nok currently has five daily flights between Bangkok and Phuket, with six flights on Fridays and Sundays. Nok plans to increase these services for the upcoming high season.

Operating out of Don Mueang Airport in Bangkok, Nok offers flights to Phuket from the capital aboard its fleet of 189-seat Boeing 737-800s.

The load factor on the Phuket flights has been consistently strong at about 90 per cent, even in the aftermath of the Erawan Shrine bombing, Mr Pinyot said.

The effect of the tragedy on its Phuket service was largely mitigated by the fact that as much as 95 per cent of its passengers to Phuket are Thai, he added.

“Usually after an event like that one would expect to see an immediate drop in bookings, but that was not the case. We were all really surprised by it, to be quite honest.

“We expected a slight seasonal dip in September followed by demand rising in October and into the high season.”

Nok plans to increase the number flights to Phuket even further after the current airport expansion project is completed. Work on the mega-project is on schedule and should be finished by mid-February. Nok deems six or seven flights daily as ‘manageable’ after the work is finished.

Seasonal demand for flights to Phuket has changed a great deal over the past five years and the island is now much more of a year-round destination. Nok uses a variety of advertising campaigns to remind its main client base, Thais living in metropolitan Bangkok, that it does not rain continuously in Phuket during the monsoon season.

Load factors on the Bangkok-Phuket route have consistently been among Nok’s highest in recent years.

“In the mechanics of low-cost carriers, we do not typically push promotions on flight routes that are doing well. But the downside of this is that we have not directed much promotion effort to foreigners.

“Our passengers to Phuket are about 95 per cent Thai, but in a market like Phuket where as much as 80 per cent of passengers in transit are foreigners, we need to do a better job capturing that market,” Mr Pinyot said.

Nationwide, Nok Air and Thai AirAsia are neck-and-neck in terms of market share, each with about one-third of the domestic market. The final third is divided among other carriers including Lion Air, Bangkok Airways and Thai Smile.

“But it varies from city to city. For Phuket, AirAsia has greater market share because they offer more flights,” he said.

When asked about the rapid expansion of Indonesian carrier Lion Air into the Thai market, Mr Pinyot said, “Luckily, Phuket has quite a high demand, so the market is huge. Lion Air is in direct competition with us and their rates are really low – ridiculously so, on some routes.”

He cited the Hat Yai-Bangkok route as an example. Pre-booked flights start at about 1,400 baht on Nok; about 700 to 800 baht for AirAsia. Lion Air now offers flights on the route for as low as 350 baht.

Such low fares pull down the low-cost air carrier market overall, but it also puts Lion Air in direct competition with land transport services offered on trains, vans and buses which still dwarf air traffic in terms of volume.

“It does have an effect when the price difference on the route is over 1,000 baht. It is affecting us in terms of fares because we cannot push fares up as much as we would like to, but it does not affect us so much in terms of passenger numbers,” he said.

Competing with Lion Air differs from doing so with AirAsia, he noted.

Getting a foreign divorce in Thailand