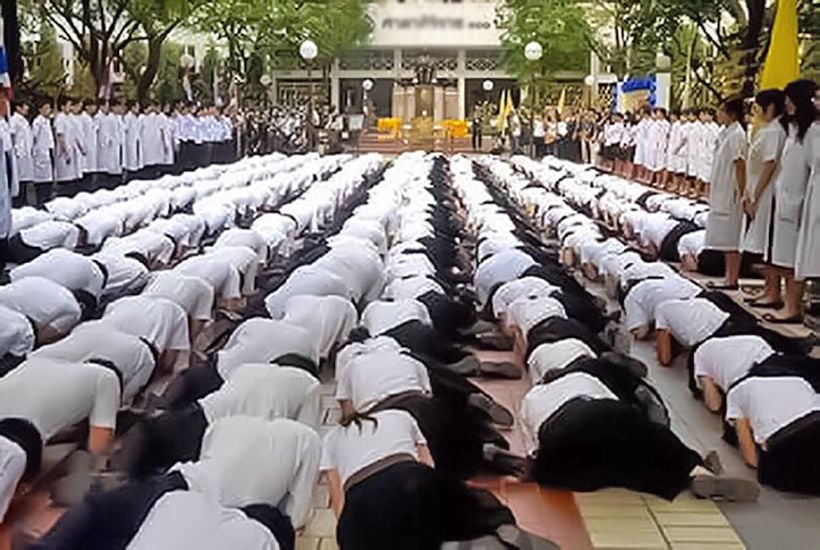 More than 1,000 members of Bangkok’s Bodindecha School community have signed a petition asking the principal to abolish mandatory prostration – the act of submissively kneeling or grovelling as a sign of respect. On July 2, the Bodin Democracy group launched a campaign to demand an end to the practice by encouraging netizens who agree with the cause to use the hashtag #AbolishProstration (#ยกเลิกหมอบกราบ) until it trended on Twitter.

Thailand’s King Chulalongkorn abolished the tradition of prostration back in 1873 but the custom has crept back into fashion during the time of the late King Bhumibol Adulyadej.

Prostration is the placement of the body in a reverentially or submissively prone position as a gesture. Typically prostration is distinguished from the lesser acts of bowing or kneeling by involving a part of the body above the knee touching the ground, especially the hands – Wikipedia

On July 4, the group wrote a petition to the school’s principal calling for prostration to be replaced with the ‘wai’ (the traditional Thai greeting with the palms pressed together in a prayer-like fashion) as the way to show respect. 1,276 people, including current and former students, signed the petition.

According to the petition, students at the school are forced to prostrate themselves as a way to show respect to others. The group views it as a way for teachers to oppress students; some teachers even said they would not allow students to look up until they were satisfied.

The petition gives 6 reasons for the change…

The group says they are not against acts of showing respect, but rather against acts of dehumanisation. Students at Bodindecha (Sing Singhaseni) 2 School and Satri Rachinuthit School are signing similar petitions. Prostration has been a gesture of respect and hierarchy in Thai society for many years. It can still be seen in religious, family, and monarchy-related activities.