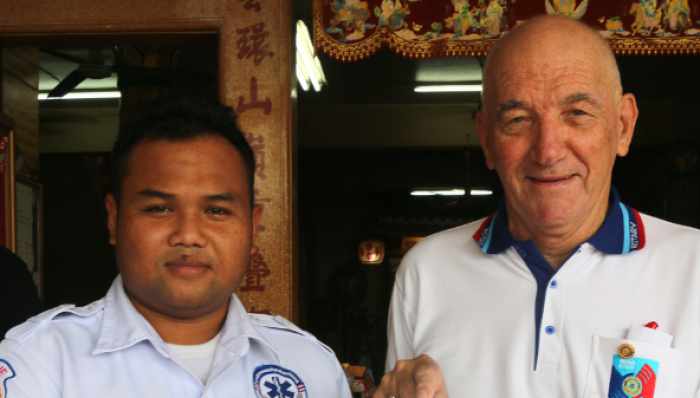 PHUKET: Jessada Janpen, a rescue worker with the Kusoldham Foundation was awarded the Rotary International’s Family and Community Service Award for his bravery and commitment in service to the community.

On May 26 Mr Jessada was one of the first to arrive on the scene of a Phuket Town sewer accident which eventually claimed the lives of four workers. Wasting no time, he plunged into the sewer to rescue the maintenance workers who had succumbed to hydrogen sulfide fumes. Seconds later he lay unconscious at the bottom of sewer pit. (story here).

In recognition of his bravery and commitment, The Rotary Club of Patong Beach decided to award Mr Janpen the Family and Community Service Award, presented to individuals and institutions in recognition of their efforts to improve lives of local communities, only the fifth of its kind bestowed upon a Phuket individual or group.

Mr Janpen received the award form the hands of Rotary Club of Patong Beach President Denis Carpenter and the Immediate Past President Larry Amsden who said, that in addition to serving the local community, Rotary Club finds it important to recognize other individuals or organizations who do the same.

History: One gun to rule them all