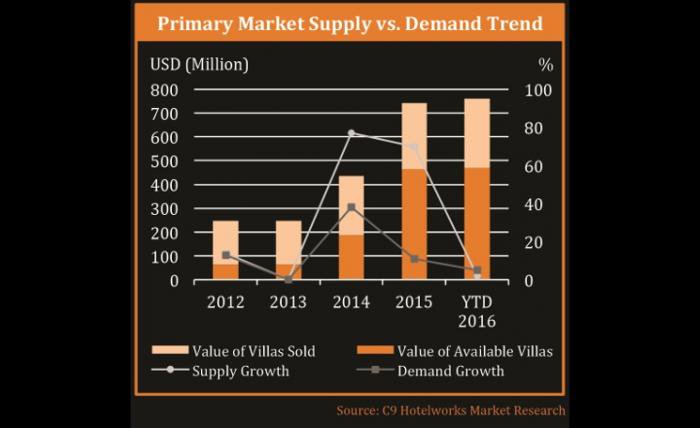 PHUKET: For the most part, the booming tourist high season at the start of 2016 was a challenge for the island’s luxury real estate sector, as there was no domino effect. Instead, the villa market went stone cold.

As we edge towards yet another winter peak high season though, the question for the property market is, “what does the future hold?”

We have just released the new ‘C9 Hotelworks Phuket Luxury Villa Market Update’ and based on our analysis, the prevailing market has seen a sharp rise of secondary sales against primary market transactions.

At the same time, Bangkok and other Asian central business district offerings are now seeing a surge in overseas buyers at the top end of the market.

Take note of the hotel branded residences on the river such as the Four Seasons and Mandarin Oriental offerings – competition is heating up.

You can also factor in the global economic slowdown and volatile currency.

Yet if we turn back the clock and look at Asia’s real estate post-global financial crisis, the ultra-luxury segment was one of the first markets to pick up and sustain traction during that time.
Behind the push in Phuket’s secondary sales is the reality that many of these villas are prime properties, so the choice is limited, and there are high entry barriers.

That means some early buyers are exiting as a normal trend in the recurring market cycle, not because of over-supply.

Getting inside the numbers, I find comfort in knowing that the existing real estate market in luxury properties has a total value that is well in excess of US$1 billion.

The island’s top-end market segment remains the best performer in the region.

Drive around Phuket and you can do the math if you start adding up the existing values on Kamala’s Millionaires Mile, Nai Thon, Bang Tao, Surin, Cape Yamu or Cape Panwa.

Looking forward to the end of 2016 and into 2017, the pick-up of sales at Bill Heinecke’s ‘The Residences by Anantara’ in Layan, signals the start of a new cycle.

There is strong interest at The Estates at MontAzure for its large land plots and signature design by celebrity designers Lek Bunnag and Jaya Ibrahim bodes well.

In the wings is the banner Rosewood resort. Its multimillion-dollar villas currently under development will usher in estate villas into the marketplace.

Again and again, we see the cyclical nature of the island’s property market. While our new report spells out current trading challenges, our forecast is that we are about to enter a new cycle that will likely see a renewed interest in the impressive new top-grade products in the island’s luxury segment.

Property Watch: Impact of weather on the property market

Across the Land: In the Departure lounge to Damascus