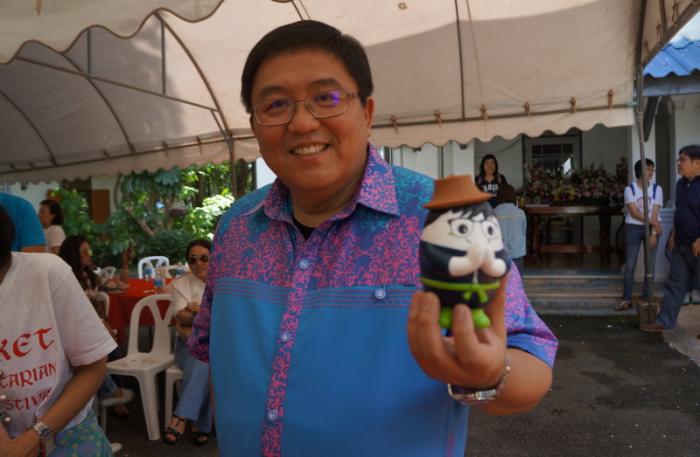 PHUKET: On his first day as new Phuket Governor, Dr Chokchai Dejamorthan promised to deal with bad driving in the province and strategize Phuket’s path to smart city status. Originally from Chachoengsao, he holds a doctorate in philosophy from the Christian University of Thailand, a master’s in Social Development from the National Institute of Development Administration, and a bachelor’s degree in Law from Thammasat University.

Here he outlines his plans for the province during his tenure.

I’ve always wanted to come to Phuket. I think it’s my good luck to eventually have the chance to work here. Phuket is totally different from Maha Sarakham. I moved from the countryside to the city, from a place with far fewer entertainment venues, but also much fewer conflicts.

On my first day here, I saw several bad drivers. I want to see Phuket people obeying traffic laws. We are all aware of the law, but sometimes we ignore it or breach it. Following regulations is very important and this is something I want to ensure during my time here.

There are many issues which only exist because someone is profiting from the situation. However, I believe that every problem has a solution. Problems can always be fixed if we follow the right procedure and talk to the right people. I have faced many challenges so far in my career and I don’t believe that any problems in Phuket are too big to handle. I was handling countrywide issues as the deputy director of the Department of Local Administration, so I believe I am up to the task. I intend to have a hands-on approach, joining in as many events and initiatives as possible.

As I said, Phuket is very different from Maha Sarakham. Back there, I had to work hard to draw attention to the province, as earning a sufficient income was difficult for the locals. Phuket is already well known, but the problems in Phuket are more complicated, to my knowledge. However, there is also immense potential and outstanding ability to go with it.

The main issues on the agenda are improving the traffic situation, getting rid of corruption, boosting tourism and working on the smart city initiative. These are all listed in the national agenda and I consider them top priority issues.

I have a campaign in mind, known as the ‘Recover Phuket campaign; reconciliation, cooperation and vision’. I haven’t chalked out all the details yet, but I believe it will be a win-win situation for all. I aim to focus on projects that benefit the majority, not just a particular group or a select few individuals. The general public, private sector and public sector must cooperate with each other to drive Phuket forward.

I will not change any of the policies implemented by the provincial government, because I believe the authorities are capable enough and have put much thought and effort into formulating these strategies. They only want what’s best for us and I respect that. I will, however, work toward making this vision more practical and achievable. The hardest part is coming down to the grassroots level and planning out every detail to make these strategies as practical as possible. I will study all these plans as soon as possible.

Phuket already has a great reputation for beautiful scenery and local products. We just have to work toward adding more value to it. We are already on our way to being a smart city, but I want to add something more to it – I want it to be a city of happiness.

One major area to focus on is the speed of government service. I believe it is necessary for government departments to provide fast and efficient solutions to the public. We have to come up with a system to make sure our work is quick and accurate.

As I am new to the province, I am still trying to prioritize the problems that I will deal with first. We must take it step by step and talk things through first. I am an honest person – I believe in following the rules and playing by the system. If anyone has any problems, we can hash them out together. We may disagree with each other on some points, but once a final decision is made, everyone has to abide by it and accept it. There should be no hard feelings.

I promise to use my knowledge and experience to do what’s best for Phuket. I am not unduly worried as I have worked with Phuket government officials before, so my experience will come in handy. My superiors have decided that it’s best for me to work here, so I accept their decision and will do my best. If I am not satisfied with the results, I will reevaluate myself and my strategy. My main goal is always to get the best results.

I came here with a low profile and have nothing to lose. Once I decide to so something, I dig my heels into it and give it my best. I believe in being above board and transparent in all my endeavors, so if I do something, my superiors will always know about it. People sometimes call me “kind uncle Chok” and I agree with that. I am a relaxed and friendly person and that’s the kind of environment I like to work in, without any formality or external pressures. That is why I’m happy to be here on this island with beautiful sea views.

I was not born or raised in Phuket and I don’t know how long I’ll be here. However, that will not stop me from putting my foremost efforts into doing everything possible for the benefit of Phuket and its people. There is no point in conflict and rivalry. Let’s all work together, cooperate with each other, maintain a productive and friendly environment and strive to do what’s best for Phuket.

Opinion: Stick to the legal limit