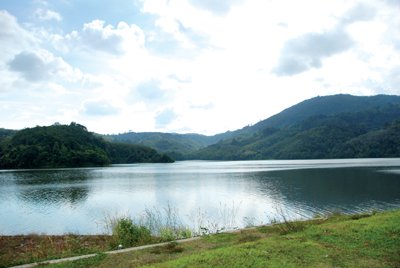 The project will allow local communities in the north of Phuket to start hooking up their local water networks to the mains and use government water supply in their homes in Srisoonthorn, Thepkrasattri and Mai Khao subdistricts.

Connecting with the local water mains network from Ban Jo water treatment plant – which treats water from Bang Neaw Dun reservoir, Phuket’s second largest water source – the new pipes will be laid alongside the southbound lane of Thepkrasattri Road from the 16km road marker to the 30km marker.

Pornthep Bunyapaluek, an engineer at Phuket office of the Royal Irrigation Project, said the project is aimed at resolving recurring water shortages suffered by residents in the north.

The budget, approved but not yet arrived, is expected in February, said Mr Pornthep.

However, once the funding has been transferred, the work is expected to take only 90 days to complete, said Phuket Provincial Waterworks Authority Manager Pisak Chonlayutsaid.

“This project is not under public tender, so the Provincial Waterworks Authority will do work themselves,” he said.

“People living in the areas affected by the expansion will be served clear tap water, not water for agriculture, by next June,” he said.

“In fiscal year 2013, we want to boost to water treatment at Bang Jo by 7,200 cubic meters a day. We also want a facility to be installed at the Klong Kata reservoir that can treat up to 12,000 cubic meters of water day,” Mr Pisak said.