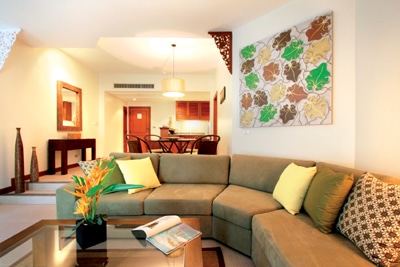 PHUKET: Nearly two decades ago, in 1993, Laguna Phuket started residential sales for their Allamanda condominium. Asia was a rising star, the baht surged in appreciation and foreign investment into Thailand property was still in its early days.

Though residential-led hospitality, or condo-hotels, was hardly new on the scene, here the book was blank on how, why or what the future of the product would be. Over the years, the plunge into various realms of alternative ownership has proved to be a rocky road for the property market.

Initially Banyan Tree operated Allamanda as a low cost entry point into the destination resort of Laguna, positioning it below the Sheraton Grande (now Angsana), Dusit and Laguna Beach Resort. Blending the management culture of a luxury and mid-scale offering is never an easy task and this proved equally cumbersome.

Later two more Allamandas came on board over the years, known as 2 and 3. Legally these are each individual condominium juristic persons and the only binding entity was the namesake.

Timeshare, or what we now often refer to as gentrified vacation ownership, kicked off in 1998 with the then Allamanda Vacation Club (now Laguna Holiday Club) taking inventory in the condo blocks and selling time-based stays.

After the 1997 Asian contagion, selling one week timeshare units was deemed to be far easier than unit sales and looked to be the way forward to spur the pace of sales in the project. However, as Asia’s second property wave took off in the early part of the last decade, product demands, especially those seeking large town homes and villas, changed the marketplace in a dramatic fashion. Instead of one and two bedroom units, buyers wanted those scarce pool villas and more space.

As market sentiment flourished, Laguna took the opportunity to develop a purpose built vacation ownership complex, the Laguna Holiday Club. Tension between unit owners and management, and a better alignment of business interests dictated the move. Traditional hotels and on-the-spot-resort-sales make strange bedfellows, so going from a shared room into a separate space made sense.

Being an observer of the property market, it puzzled me during those boom years why waterfront duplex units and condos along the golf course failed to experience the same rise in capital appreciation as the larger marketplace. Here we had a prime location near the beach with complete infrastructure and life in an integrated resort. If it were boxing, Allamanda was fighting below its weight.

It’s known within the industry about the fracturing of relationships between the various Allamandas, the developer and owners. Eventually this came to a head with part of the complex becoming the Best Western Allamanda. One portion elected not to operate as a hotel.

Enter hospitality veteran and long time Phuket resident Robert de Graaf with an impressive resume, and whose Albatross Travel Agency and dining outlet have been mainstays in the community. Under his watch, things are clearly on the upswing. With a bit of care and navigation of murky waters needed by a technocrat, the rental operation has a new lease on life.

A recently staged upgrading of units is ongoing and improvements to the food and beverage operation have lifted up the entire atmosphere. Robert has worked tirelessly and with passion, which is exactly what has been needed.

As for the ugly beast of condo-hotels, communal resort living and the powder keg of political infighting is hardly specific to Phuket. Just visit a coop in any world class destination. Annual owner meetings often mimic Gadaffi’s last days of power in Libya. Ever since Cain and Abel, when you put one person in close proximity with another, there is bound to be trouble.

I had coffee recently with Robert, and it’s nice to see things moving forward in the right direction.

As I write this, the word on the grapevine is that perhaps interests may be aligning among the various components of the project and that a uniform property offering may be in the works. For property owners the timing could not be better, with the island gearing up for a terrific high season.

Thalang turns on the waterworks