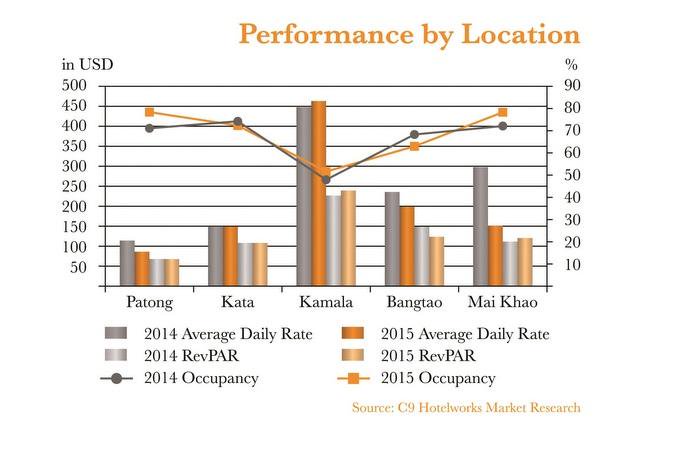 PHUKET: Last year was a favorable one for tourism in Phuket, boosting confidence throughout the hospitality and property sectors with a rise in ‘quality’ tourists and investors – a trend that appears set to continue in 2016.

Arrivals at Phuket International Airport soared to 6.4 million – a record number of passengers passing through the province, according to the latest market research by Bill Barnett, the managing director of C9 Hotelworks hospitality and consulting firm.

“Despite both domestic and international volatility, there has been a compound annual growth of 14 per cent over the past five years,” said Mr Barnett.

International arrivals were up by nine per cent, and there was a 19 per cent increase in domestic arrivals in 2015.

A 34 per cent drop in arrivals from Russia was offset by a 35 per cent rise in visitors from China.

Part of the island’s success was due to luxury-tier hotels outperforming all other segments with the average daily rate (ADR) and occupancy rising by 17 per cent and three per cent respectively. Additionally, revenue per available room (RevPAR) increased by 24 per cent.

The steady growth of Phuket’s evolving tourist market over the past five years has spurned new growth in hospitality properties. Phuket currently has a total of 766 licensed lodging establishments with 49,645 keys.

A dozen new hotels are set to open this year, adding 1,567 rooms to the market. About half of the new rooms will appear in Patong.

“Hotel supply is expected to continue growing over the next four years with 30 new projects set to come on line by 2019. That’s more than 5,000 keys coming on stream,” said Mr Barnett.

The majority of the new projects are in Patong, followed by Chalong Bay, Phuket City, Kamala and Bang Tao.

At the boutique end of the spectrum are some small properties, including X2 Kamala Residences, with just nine rooms, opening this year.

There is also a demand for back-to-nature experiences among travellers, creating a niche hospitality market.

Innovative product designs and programming into niches such as wellness, tree houses and active sports are expected to boost future growth.

By the Book: What is property valuation?