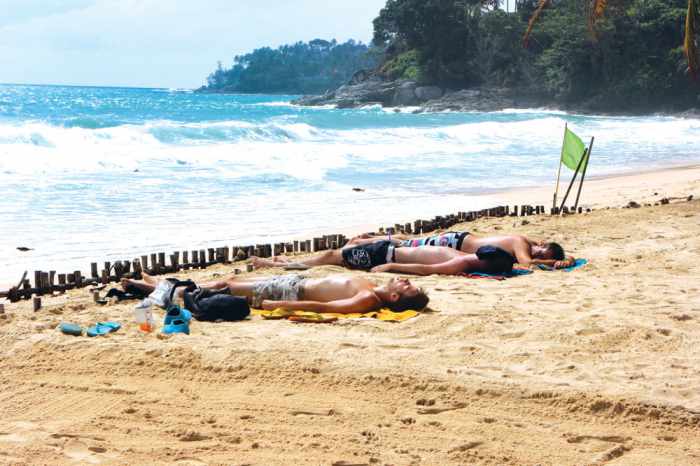 PHUKET: Whenever a property column starts out with Billy Shakes and the talk turns to slings and arrows, you’d best buckle up the seat belts. Yes, we are again turning our eyes to Phuket real estate after an extended hiatus into the arcane and zig-zag run for the goal posts. Sadly, like Brazil, there is always hope in another four years.

As the island’s collective wavelength has heads spinning 360 degrees, not unlike the classic scene from the Exorcist, Phuket’s current clean up is now headed down an altogether too familiar pathway – into the real estate sector.

While the emotional epicenter for lounger-land is Surin Beach, in the case of property it’s the ultra-villas alleged to be located in Sirinath National Park. Multi-million dollar properties and hotels, which banter has it, may be at risk of revocation of titles and at the worst, eventual demolition.

Ah yes, it was not that long ago when the man tagged as “The Demolisher” wagged a finger at high fliers and threatened a fast track down the karma road. That now seems to be a distant memory, yet land scandals have been repeated on the front pages of newspapers long before the decade since I’ve lived here.

The question hanging over us, is of course, will this time be any different? I’m not even going to attempt answering that one. One of the most entertaining comments I’ve heard recently was from a high priced Bangkok legal adviser who said, “there has never been a better time to be a lawyer.”

Certainly, that sums things up pretty well, but for a broader property perspective on where the current regime is headed on the property front, news from the capital has it that changes in the tax regime are being looked at – both for real estate developers and also a longer-term plan of increasing the VAT (value added tax) to 10 per cent.

Neither financial markets, investors, nor the property market are keen supporters of volatility. When you draw the line, the consensus usually settles on stabilized marketplaces or developing economies. Uncertainty, while inevitable in political disruptions, simply stalls the business of business. There is little doubt that reforms and the much anticipated AEC initiative (Asean Economic Community) coming up in 2015 will potentially bring game-changing ideas to the fore.

Or will they? While the EU is not merely an economic ploy, but an organization with actual political teeth, the AEC seems to be little understood in the far corners of Southeast Asia. Don’t call me a pessimist yet, but one thing is for sure, there is little clarity on the impact of the AEC initiatives. For most tax and legal experts I’ve spoken to, the future is a wait-and-see proposition.

Ah yes, wait and see is a familiar tune for the property sector here in Phuket as well, as the night turns black and the classic rock station beams out Don’t Fear the Reaper. It’s always darkest before dawn and the only certainty in the Sirinath National Park debacle seems to be that it’s going to be fun finding out what happens next.

As for Billy’s Hamlet, things did not exactly work out for him, with a poison dagger to the back. And yes the body is taken away with honor. What about Phuket’s property market? To be or not to be? It looks like old times are back again and it seems that this current age of uncertainty will be best interpreted through the tracks in the sand where the sun loungers once stood tall and defiant.

Bill Barnett is Managing Director of C9Hotelworks, he can be contacted through c9hotelworks.com

Property Watch: Life in the days of future past