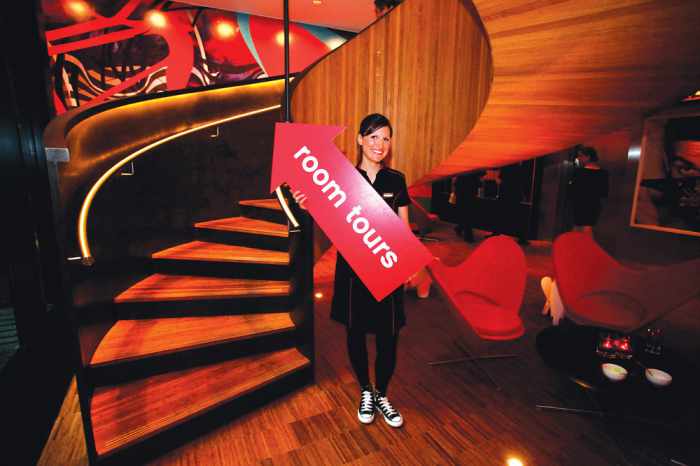 HAVE you ever heard music ringing in your ears or else started humming to yourself in a hotel room? You have indeed stumbled as an extra onto the movie Sound of Music. Not. But hotels that provide an emotional uplift from design, art or creative energy can be a source of inspiration for even the most road hardened traveller.

What’s key to this type of experience is that the luxury of style can be affordable. One of my touchstones remains the legendary citizenM brand. This brand has set the gold standard – starting out in the Netherlands, and now featuring properties in London, New York and Glasgow. I was recently in an audience listening to Michael Levie, one of the company’s founders, who talked about the importance of communal areas and the wisdom of encouraging guests to get out of their rooms and congregate in the open areas – similar to how people living in a house tend to gravitate towards the living room.

Earlier this year, citizenM announced a roll-out in Asia, in partnership with Shun Tak Holdings, under the venture name of Artyzen. China, and eventually gateway cities in Southeast Asia, are both high on the expansion agenda. Shun Tak was founded by gaming magnate Stanley Ho and is now looked after by the next generation of his family. Part of their game plan in Asia included recruiting noted hotelier Edmund Ip, whose work history includes positions with Banyan Tree, Hyatt and InterContinental.

But back to my own wish list of hotel brands that create a difference – from European budget-with-style group Chic + Basic, to the more upscale Grupo Habita in Mexico, which is sprouting wings internationally or Australia’s funky QT Hotels and Resorts. Travellers can now come out, come out, wherever they are and play (or work).

Institutional hotel groups remain keen to cash-in and develop scalable models. From IHG’s Indigo, to Hyatt’s Andaz, the big boys want in on the game. One venture that has captured the wider imagination is hospitality giant Marriott’s venture with IKEA on the brand Moxy. Brash, bold and now developing a footprint across Europe, keep an eye on this mover and shaker. Certainly, there are other contenders, from Starwood’s Aloft, Radisson Red, and even the purpose built Yotel who tasked aircraft designers with creating the perfect little-big hotel room.

It’s understated and out of the ordinary. One key feature is the food and beverage operation which is linked to Gavin’s other ventures Kuppa Deli and Glowfish communal work spaces. Technology has been integrated thoughtfully by leading Hong Kong guru Terence Ronson – with a focus of form and function.
Staying small and thinking outside the box is something which looks to be happening across Asia and certainly the signs are right here in Thailand.

Despite the creep of same-sames into the marketplace, and the creation of an entirely new set of bed factories, the flip side of the coin has some impressive new players bringing impressive new products into the market. Just as low-cost airlines have changed our lives in such a profound way, the new niche hotels look to make travellers lives more interesting by tapping into our sense of individualism.

Bill Barnett is Managing Director of C9Hotelworks. He can be contacted through: c9hotelworks.com. See more of Bill’s writing on his hotel industry focused blog The Phuket Insider