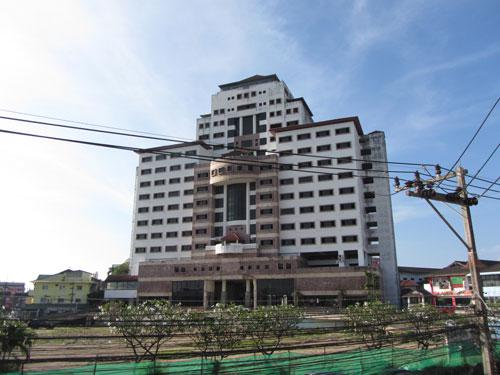 PHUKET: Some good news for the property market in the heart of Phuket Town: the old Thavorn Grand Plaza Hotel has been acquired by an owner affiliated with the Accor Group of hotels and is now undergoing a complete renovation for a scheduled rebranding under one of that group’s many hotel chains.

Work at the site had been underway for almost a month before the Phuket Gazette could get any workers there to volunteer any information as to who was funding it or the massive overhaul in the adjacent Grand Plaza Massage complex (opposite Robinsons) which closed at about the same time as the hotel.

After repeated attempts, one of the workers said he had heard that the project would take two years to complete and then reopen under the Novotel brand.

The Gazette contacted Olivier Nourry, the new General Manager at Novotel Phuket Resort in Patong, to try to confirm the information. Mr Nourry, who was just in his fourth day of work in his new position, put us in touch with Vasu Thirasak, Regional Director of Communications for the Accor Group.

Mr Vasu confirmed that the complex had been acquired by one of the hotel owners in the Accor Group, but added that, “We don’t yet know what he has in store for this hotel”.

Accor, a leading hotel operator and market leader in Europe, is present in 92 countries with more than 3,500 hotels and 450,000 rooms, which include some high-end names like Novotel, Sofitel and Pullman.

In Thailand, the group operates 50 properties with a total of 11,840 rooms, according to its website. These include: 3 Sofitels, 5 Pullmans, 5 MGallery boutique hotels, 12 Novotels, 9 Mercures, 9 ibises and 3 ibis Styles, as well as four unbranded properties.

Mr Vasu has promised to inform the Gazette as soon as possible as to the owner’s plans for the complex.

As age took its toll on the property over the years, the hotel gradually became more of a budget accommodation.

It remains to be seen if the surrounding area, which has suffered some urban decay over the years, could justify an upscale hotel property. However, the arrival of any such property would likely be seen as a boon to businesses in the area.

An invitation to Sleep With Me