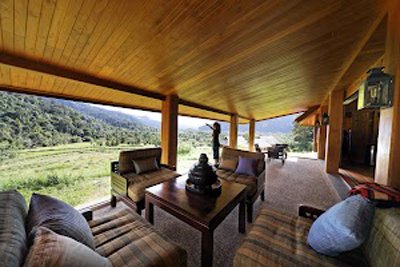 PHUKET: Accolades continue to pour down on Thanyamundra, the unique five-star organic resort perched upon the fringes of Thailand’s most ancient rainforest.

Thanyamundra has been elevated to the elite ranks of hotels and resorts included on DestinAsian magazine’s prestigious Luxe List, just weeks after being voted by agoda.com as one of Asia’s Top Three Eco-Boutiques. Agoda also honored the resort in June 2011 as one of Asia’s Top Five Zen Destinations. Britain’s The Independent newspaper recently named the resort as one of Thailand’s “Big Six Chic Retreats”.

DestinAsian ensures each property elevated to its Luxe List has been visited by one of the magazine’s contributors, and vetted by its editorial staff, who combed through hundreds of candidate establishments before choosing the final list of 36 new hotels and resorts spanning 13 countries, based on criteria such as design, service, location, and ambience.

Says DestinAsian Editor-in-Chief and Associate Publisher, Christopher Hill, “It’s a leaner Luxe List than last year’s, with, surprisingly, no entries from Australia and New Zealand. But the results are no less exciting, and certainly no less Luxe — that rare convergence of style and substance that sets a place well above the rest. We have every confidence that these properties have all the makings of instant classics.”

Meanwhile according to agoda, Thanyamundra is the place to stay in Khao Sok National Park, the largest untouched rainforest in Thailand with limestone peaks and a beautiful man-made lake and abundant wildlife. Announcing the list, an agoda spokesman said: “Believing destinations offering solitude should still be accessible, each resort is less than three hours from an international airport and has been tried and tested.”

The nine-room resort and retreat is perched above the rolling terraces of an organic farm where some of the Asia’s most pure produce is lovingly coaxed from rich soil, amidst the mist-shrouded mountains and imposing karsts of Khao Sok National Park. With Asian antique-filled rooms and suites in two Thai-inspired golden teak villas, Thanyamundra has been transformed from the home of a European entrepreneur into an impressive retreat offering the finest hotel service, gourmet organic cuisine and a chance to explore the organic farm, and holistic wellness in an incredible natural environment. Its facilities are also spectacular, from the 50m lap pool overlooking the villas, farm and valley to a professional athlete level gym, and a yoga room.

The resort is part of Thanyapura, Phuket’s cutting-edge campus of world-class health, wellness, sport and educational offerings, including the Olympic-standard sports facilities of the Thanyapura Sports & Leisure Club, the Mind Centre, and Phuket International Academy.

Thanyapura Group President Robert C. Hauck said the slew of recent awards and recognition for Thanyamundra was gratifying, but not entirely surprising. “Everyone who visits comes away amazed by the sheer beauty, authenticity and peace of the place,” he said. “We are now in the process of creating an organic spa experience to be set amongst the rice terraces, and that will help complete our offering here. You really have to experience it to understand.”