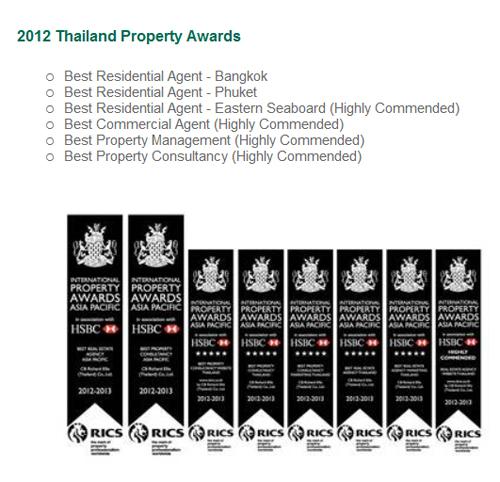 PHUKET: CBRE announced, on March 26, that the company has achieved top-three rankings in 25 categories across 13 countries in the Asia Pacific Property Awards in all real estate categories, in nearly every major market across the region from New Zealand to China.

“For CBRE Thailand, this takes our running total of International Property Awards up to 36 awards including past wins such as World’s Best Commercial Real Estate Website in 2009, Asia Pacific Best Real Estate Agency in 2012 and Best Property Consultancy in Thailand in 2011 and 2012,” added Mr. David Simister, Chairman of CBRE Thailand.

Stuart Shield, president of the International Property Awards, said, “The entries that we receive from the Asia Pacific region become more impressive year after year. The winning companies have outshone their peers and proven exceptional levels of professionalism and competence in their field.”

The site was launched in 1998 and has drawn a considerable amount of traffic for property and rentals. Managing Director Martin Phillips has said he is keen to continue to develop the group’s island interest and their regional expansion from Singapore.

After the debacle during this last peak season with Phuket International Airport banning private jets for an extended period of time, the Thai Navy may provide a solution.

According to national Thai media a 40-rai plot adjacent to PIA, which is used by the Royal Thai Navy, may be partially used for the parking of private jet aircraft pending discussions with AoT. The comments come from the AoT and look to be only an interim solution until the new airport upgrade is completed in 2015.

An award ceremony will be held on May 10th at the Shangri-La hotel in Kuala Lumpur.