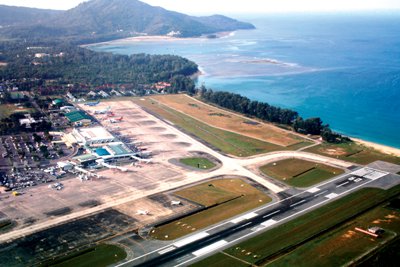 PHUKET International Airport (PIA) will be able to receive 12.5 million visitors per year by 2014 following a planned 5.7 billion-baht expansion, Thailand’s deputy transport minister told reporters during a recent visit to the island.

Kittisakdi Hathasongkorh said the airport’s runway would be lengthened by 700 meters to allow the new generation of “superjumbos”, the Airbus A380 and Boeing 747-8, to fly to the island from Europe.

Passenger-terminal capacity will also need to be expanded in order to cope with the larger arrival numbers projected over coming years, he said.

The plan to extend the runway was approved by the government and Airports of Thailand (AoT) in May 2008. Extending the runway is not expected to be a straightforward task. It is bounded at one end by the sea and at the other by jungle-covered hills. The project will therefore require either land reclamation in the sea or the leveling of the hills using explosives.

Mr Kittisakdi said there would need to be further public consultation to decide on the best approach.

He was speaking after receiving a tour of Phuket International Airport’s air-traffic control center.

Phuket Property: Scribing the way to a clear handover