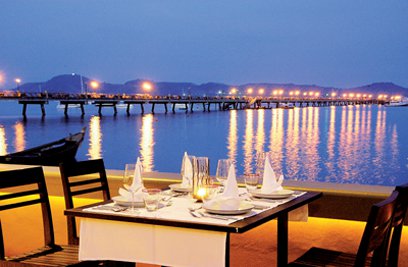 PHUKET: Kan Eang @ Pier is a Phuket institution and has been so for more than 30 years. Originally called ‘Kan Eang 1’, this famous Phuket seafood restaurant underwent a major renovation and name change in 2007. The sprawling grounds stretch more than 200 meters along Chalong Bay just south of the pier and here you’ll find several al-fresco and air-conditioned eating spaces, a dessert section and a bar – all of which enjoy views of the busy pier and the moored yachts in the bay to the north.

The natural shade afforded by the grounds’ leafy tropical almond trees, along with brisk sea breezes ensures that this is a comfort zone. In short, Kan Eang is a class act and a seafood lover’s nirvana. Squid, red snapper, tuna, salmon, catfish, cockles, lobster, crab, shellfish, shrimp, oysters, sea cucumbers, octopus, tiger prawns, king prawns, cuttlefish, you name it; if it swims Kan Eang serves it up with panache and if fish fingers could swim they’d be on the menu, too.

One of the most singular characteristics of this restaurant is that for grilling it uses coconut husks instead of charcoal so the kitchen area is redolent of fragment husks – and that lends a certain charm.

Located on what was previously a sleepy Chalong soi, nowadays Soi Sunrise (so-named because it faces due east) is the sort of street that sailors cannot walk along without all sorts of exotic delights being offered but thankfully Kan Eang distances itself from such temptations and sticks to what it’s good at: gastronomic aquatic delights. Mind you, who’s to say that a bit of rumpy-pumpy and seafood don’t mix? After all, they say Casanova ate more than 50 oysters a day.

Worldwide, seafood represents some 16 per cent of animal protein consumed but surely this statistic is much higher in Phuket, where guzzling marine creatures is near the top on the must-do list of many visitors’ itineraries.

On arrival at Kan Eang, one of the first impressions diners get is of smiling waiters walking around talking to themselves; a bizarre touch, to be sure, but on closer inspection, it turns out they’re taking orders and relaying them to the kitchen staff via clever hands-free-mike-and-touch-screen setups. We’re shown to our table next to the restaurant’s recent extension that makes this – probably the biggest restaurant in Phuket (it has 500 outside and 350 inside covers) – even bigger, yet the wonder of it all is that Kan Eang has none of the “pack-’em-in” feel so apparent at other east coast seafood restaurants; the service, led by the excellent Khun Ching and Khun Joe, is decidedly personal.

Minutes later, we’re tucking into a “water weed” with shrimp tempura (120 baht), fresh oysters with garnish (90 baht for two) and spanking-fresh sliced tiger prawns on a bed of ice (180 baht 100gms) along with a typical Phuket dish – hor mok (steamed fish curry mousse wrapped in a banana leaf which costs 25 baht per parcel). It’s all delectable and definitely not for red meat lovers, although diners can easily order a red beefy steak from the adjacent Vset restaurant. The happy juice, a light, very reasonably priced Pays d’Oc rosé, is sourced from those clever people at Wine Connection, who have an on-site shop.

A live jazz trio kicks in and what with all the first-rate service, varied dishes, reasonable prices and a rosé buzz, the evening is a memorable one and extremely enjoyable, not least of all because Kan Eang is a relaxing place to be where there’s no rushed atmosphere, no visible tour bus crowds, and a lot of class: Recommended.