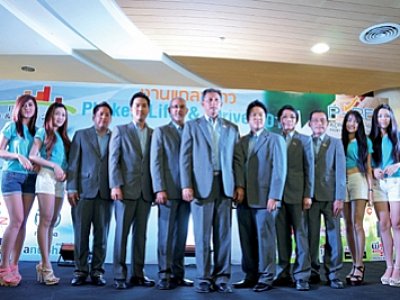 PHUKET: Bangkok based developers will pump as much as 30 billion baht into the local economy this year, the head of Phuket Real Estate Association (P-REA) has said.

Demand for reasonably-priced homes and condominiums is luring many investors to Phuket, P-REA President Tanan Tanphaibul said at a recent press conference to announce the group’s “Phuket Life & Drive 2012” exhibition, to be held at HomeWorks on the bypass road from March 28 to April 2.

“As long as tourism is on the up, the real estate business and economy will continue to prosper since tourist groups bring capital and generate demand,” he said.

Russians who arrive first as tourists and later decide to buy homes are one group driving demand, he said.

The mid- to high-end markets will grow the most, but growth at the very top end is expected to slow this year because buyers of property valued in the tens of millions are typically from the Euro zone, he said.

Projects by Bangkok developers such as Sansiri and Pruksa are outnumbering those from foreign investors. Overall, the P-REA expects Bangkok-based investments of 20 to 30 billion baht in 2012, double or triple the10-billion-baht figure for 2011, he said.

Mr Tanan pointed out that competition in the mid-range housing market will be most intense this year, due to demand for townhouses and condos priced under a million baht.

Demand for small condos priced under a million baht has boomed in Phuket due to the high price of land, with prices of 15 to 20 million baht per rai common on the island. As a result, more multi-story projects are springing up around the island, he said.

The “Phuket Life & Drive 2012” exhibition is sponsored by the Phuket Gazette and PGTV.