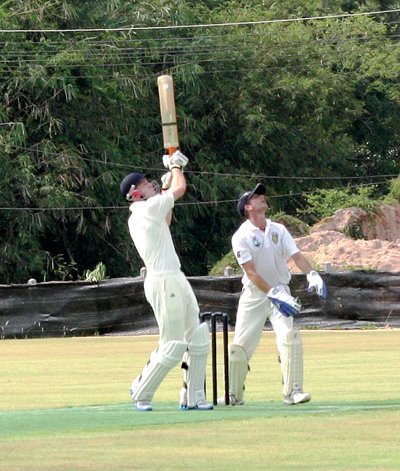 PHUKET: Cricket’s bible, the Wisden Almanac, may not record the result of Marylebone Cricket Club’s (MCC) match against the Phuket Cricket Group (PCG) select XI, but February 16 will long live in the memory of those who were at the ACG that day.

Despite arriving the previous night from the cold conditions in Old Blighty, the MCC team showed no signs of jet-lag and immediately turned up the heat on the PCG.

It should be noted that with an active membership of more than 5,000 players, it’s not unusual for an MCC touring squad to begin a match having never played together as a team, as was the case for the team that landed on Phuket.

The occasion itself was not lost on Phuket’s sporting fraternity with an impressive turnout for a school day. Packed with ACG patrons, the viewing gallery heaved in expectation of an exciting match. All that the crowd missed was fish and chips with champagne – the standard fare of Lords itself.

Having won the toss, PCG invited MCC to bat first and could only watch admirably as the visitors dynamically drove, professionally paddled, cleverly cut, expertly edged and beautifully battered the best Phuket could bowl at them. After 20 overs, MCC had hiked their run rate to almost 10 per over, giving them a total of 193 for 5 wickets.

MCC lost opener Will Rist (11) to a superb diving catch in front of first slip by PCG keeper Dean Noble in the fifth over. Fellow opener Rich Brown (31), who in fact played in Phuket’s Island Furniture League several years ago, but now plays his cricket for Templepatrick in Northern Ireland, was run out by Neil Quail after he slipped and fell attempting a second run in the ninth over with the score on 76.

A valuable contribution from Arif Mahmood (31) ended when he top-edged a ball from Sameer Khan to Seemant Raju at cover, who entertained the crowd with a juggling act before securing the catch.

With only 89 runs on the board at the halfway mark, the PCG could have been forgiven for thinking they had contained the mighty MCC, but the arrival and eventual 88-run partnership between Joe Shuttle (31 not out) and Alun Thomas (61 from 28 balls) put paid to any delusions of success the local boys may have formed.

Thomas, in particular, was merciless. Timing, power and technique were in perfect symmetry, as he collected five 6s and four 4s, with his first 6 remarkably coming off nothing more than a forward defensive shot. The young Welshman’s quiet demeanor had worried his coach and captain earlier that morning, but his performance at the ACG certainly instilled confidence amongst his team for the rest of their tour.

However, credit must go to the PCG’s young Val Guiraud, who kept his chin up in facing such a formidable opponent and with the very last ball of the innings beat Thomas for pace and accuracy to take a memorable and deserved scalp. Pick of the bowlers for Phuket were Guiraud (2 for 31) and Khan (2 for 32).

Undoubtedly, the chase was going to be difficult for PCG and on seeing the pace of MCC’s opening attack; the task became that of damage limitation.

Despite this, PCG went on the offensive determined to put on a show for their supporters. Vice captain and opener Bill Stahmer (3) was the first to go, clean bowled attempting to find the lake. From there the threads unraveled with PCG losing a wicket every over from the 4th to the 10th.

The only batsman to reach double figures during this period was Quail (18) who delivered a towering six onto the clubhouse roof, the first time this feat has been achieved, sending the patrons running for cover while an unimpressed Alan Cooke looked on.

At the 10 over mark, Phuket were eight wickets down for only 44 runs and batting out the full 20 overs was looking highly unlikely. But like a scene from any Rocky movie, PCG picked themselves up, replaced the gumshield and stood toe-to-toe with the MCC for the final rounds, or overs in this case.

Manesh Sadarangani (16) with support from Neil Culpan (9) and Dean Noble (5 not out) not only slugged it out, but got in a few decent shots until their efforts finally came to an end after 19.3 overs with the score on 77.

The MCC bowlers shared the spoils, with Patrick Goodwin, Scott Corbett, Bradley Smith and Gareth Griffiths each picking up a brace.

Man of the Match was of course, Alun Thomas.