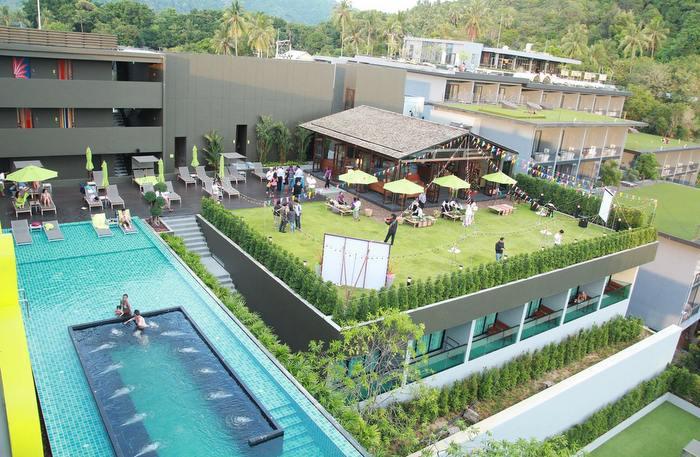 PHUKET: Kata is prime real estate for those in the hospitality industry who are catering to the free independent traveller (FIT) market segment, explained Watanyu Asawabenjang, owner of the recently-opened Nook Dee Kata Beach Phuket Resort.

“Kata Beach is where those people want to be. It’s the top choice for the FIT market, as well as couples and families,” Mr Watanyu said.

Situated in the mountains overlooking Kata Bay, the Thai-style boutique resort was built on three rai of land for a total cost of about 500 million baht.

The 68-room resort offers Superior Sea View, Deluxe Sea View and Deluxe Jacuzzi rooms with the rates swinging from 4,000 to 20,000 baht per night, depending on the room and time of year.
The resort, which held its grand opening earlier this week, invested heavily on the appeal of ‘Thainess’.

“We are selling a unique feeling of being in Thailand – bringing the exquisiteness of Thai culture and Thai cuisine to all of our guests. Not only do guests enjoy the luxurious facilities and amazing views, but they can soak up that unique feeling of Thailand during their stay at our resort,” Mr Watanyu said on Monday.

In order to win over the FIT market in the current, highly-competitive environment on Phuket, Nook Dee decided to move forward as a four-star hotel with the goal of providing five-star experiences.

So far, occupancy rates are strong at the resort – more than 80 per cent, most of which is from the Eurpoean market – confirmed Mr Watanyu.

Occupancy for the island overall remains at about 75 per cent, with 35 per cent coming from western arrivals and the rest mostly coming from major Asian markets, such as China, Korea and India, explained Kritsada Tansakul, director of the Thai Hotel Association Southern Chapter.

“In the first quarter, we will still be in the high season, so the occupancy levels should remain strong. Though the second quarter will see a change in the source markets, I don’t expect to see our occupancy numbers drop significantly,” said Mr Watanyu.

Though Nook Dee has just opened its doors on the island, Mr Watanyu is not prepared to invest further in Phuket. Instead, he is looking at nearby Andaman markets that are still relatively young, but have potential for growth.

“When it comes to hospitality, I think Khao Lak is the next place to invest. It is becoming a very well-known tourist attraction and there is plenty of room for further growth,” he said.