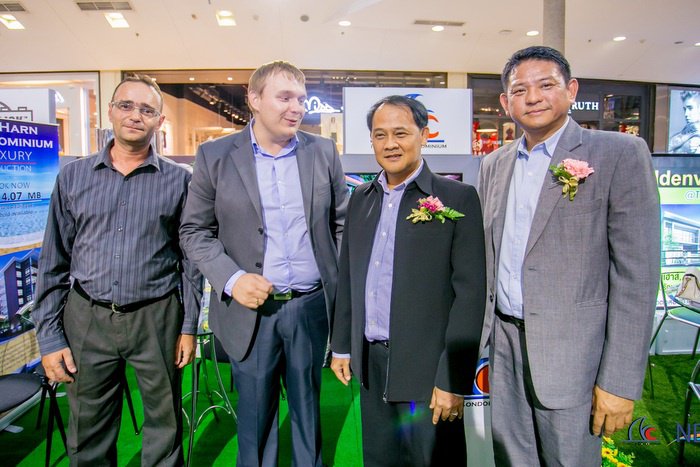 PHUKET: In the highly competitive condominium arena it takes a lot to get ahead, and among those that have done so is the stunning Nai Harn Beach Condominium, which recently won applause for its low-density structures.

The development is nestled into a prime location on the island, cheek by jowl to Nai Harn Beach, which was recently rated among the 10 best beaches in Asia by TripAdivsor. Nai Harn Beach is useable year-round, while developments on the west are affected by the southwest monsoon season from May through October.

“You can have very strong waves and currents there [on the west coast], but Nai Harn is much safer and you can swim all year round,” Frederic Perrochon, Nai Harn Beach Condominium’s sales sirector told the Gazette.

Unlike high-density condominium developments mushrooming across the world, there are only two seven-storey low-rise buildings, housing just 25 units each, including spacious 48 square meter studios, 71sqm 2-bedroom accommodations and superb 118sqm penthouses. It also features a large swimming pool, children’s playground and laundry service. Customers can get to their apartment with a panoramic glass elevator.

“Nai Harn Beach Condominium was projected by British engineers and designed by a French designer, ensuring that the project was developed according to all European standards to provide a comfortable experience. The idea of the French designers at the first stage was to preserve the internal green courtyard with a pool, cafe and playground, without any car access. It provides a quiet, comfortable and safe stay, comparable with living in a five star hotel,” explained Nai Harn Beach Condominium CEO Igor Protosov.

“According to the Thai law, condominiums are the only property that can be owned in full by foreign citizens in Thailand – a powerful argument for the customers looking for a housing purchase.”
All these features of the condominium leave little doubt as to why the project was nominated for ‘Phuket Best Condominium 2015’ in the Thailand Property Awards.

“All units are already complete and ready for owners to move in. Our development is certainly a very safe investment choice, as we are able to transfer ownership to our buyers immediately. Sweetening the deal is an offer of 7% guaranteed rental return for two years,” Mr Perrochon said.

“NBC management company will ensure a 24/7 security service and daily cleaning of all public spaces including the garden and pool. Guests will be able to book any kind of leisure service at our on-site management office.

“It will also assist the owners with short or long term rental of their apartments while they are away from Phuket.”

So far, most of the buyers at Nai Harn Beach Condominium are Europeans, Americans, Australians and Russians.

“There is no specific target [market]… we are really trying to get people to come in from all parts of the world. We are trying to create a multi-cultural atmosphere,” Mr Perrochon added.