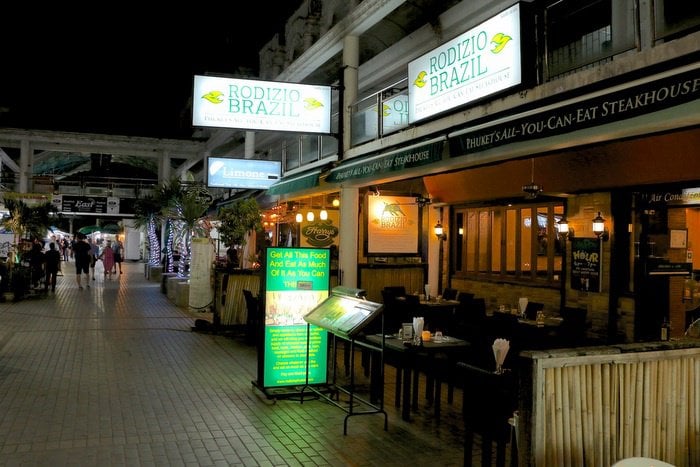 PHUKET: What makes a restaurant successful? Many will say it’s the location, but the owners of Rodizio Brazil restaurant add “commitment” to this list, as they prepare to let go of one of their Patong ventures.

It’s been a year and a half since Rodizio opened in Patong, in a narrow lane off the beachfront road, near the Patong Tower. It’s difficult not to like the concept – an all-you-can-eat buffet of grilled meats plus a salad bar and traditional Brazilian sides.

So, why have the owners of Rodizio decided to let the restaurant go?

“It’s all fine and fun, but a business needs someone looking after it,” says one of the owners, who asked only to be referred to as “Lucky”.

“A few years ago, together with my business partner, we started our first restaurant, a South American steakhouse in Jungceylon called Churrasco. Then we opened the second one, Rodizio. Unfortunately, we are both busy with our main businesses and running a restaurant is a lot of work.”

Then why sell Rodizio and not Churrasco?

“As far as restaurants go, our main focus was always Churrasco, it was our first [restaurant venture] and the one we enjoy the most,” says Lucky.

“Churrasco is located in a shopping center and you cannot go wrong with that. You have thousands of people passing by and many of them are in the area for one reason only – to eat.”

“This is a good location for a restaurant. It is near the road with a lot of traffic. The whole lane is filled with restaurants, as well as a few spas. The logical thing [for a new owner] to do would be to keep it as a restaurant,” he says.

In addition to all the relevant restaurant documentation and equipment, the new potential owner would inherit the three-story building, inclusive of two kitchens; three bedrooms with bathrooms; office space; and indoor and outdoor dining spaces.

“We have three years remaining on our rental contract for this development and we have a separate company for the restaurant set up here. All it takes is to take over the company and keep it running,” says Lucky.

“The yearly lease for the property is 1.7 million baht, which is standard for this location. It is an old lease and in fact cheaper than many other places around here, where the prices go up to as much as 2,000 baht per square meter.”

Lucky is aware of the fact that many will doubt his motivations and claim that he is letting go of the business because it simply wasn’t successful. But according to him, that’s not the case.

“We understand that making a restaurant a success takes years. And it also takes commitment. We have been successful and this place was sometimes very busy, though lately less so,” he explains.

“But if this place was really successful, I would still have to give up my other businesses and this is something I don’t want to do.”

The owners of Rodizio are hoping to get approximately 3mn baht on the company transfer and want to complete it by April. For more information call Lucky on 081 970 7007.