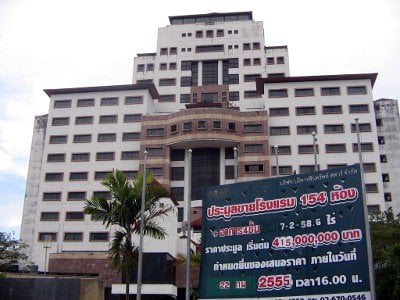 The package for sale is for the 17-storey, 154-room hotel, its attached grand ballroom, car park and the adjoining “soapy” massage parlor in a single offer the spokesperson said.

All in, the offering comprises four Chanote land titles comprising a total of about 7 rai and built-up space of no less than 30,000 square meters.

The hotel and massage parlor were developed from 1990 to 1992 by Phuket’s Dilok Group and finally acquired by Star Asset Management, a subsidiary of ACAP Advisory Pcl.

According to the Chanote titles, the acquisition was finalized in December 2010.

Last October, the firm held a closed auction for the hotel starting at 420mn baht, while the massage parlor was offered separately starting at 60mn baht.

“We did not have a winning bid for either, so now we’ve combined the offering and lowered the opening bid,” the spokesperson explained.