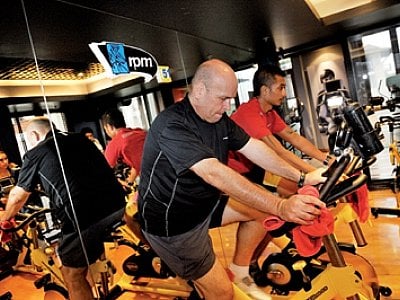 PHUKET: Tim Haddon is on a mission to change his life, and hopefully the lives of others. In six months, Tim, under the guidance of his trainer, Darren Hancock aims to change from a man with heart problems and diabetes to a man who can complete the Laguna Phuket Triathlon 2011.

TIM: What stands out most about the early days of my training – and the entire period for that matter – are the realizations I came to that really changed the game. To say that I was anxious or had personal doubts about my fitness regime is an understatement.

The anxiety began well before that fateful first day with Darren. It started when my cardiologist gave me the all clear to commence training. In the back of my mind I was half expecting him to say “You are in no condition to attempt this!”, but instead he told me “You are in good shape to start getting into shape”.

From that moment onwards, the real weight of my daunting task sank in. I was actually going to do it… it was real.

So, here we were, starting from “zero” and, to be honest, all I was thinking about was simply clawing my way through the swim portion of the triathlon, pushing my bike up the hills and then walking the 12 kilometer run with the aim of getting across the line alive.

Then, after a while I transitioned from walking into running, from splashing around in the pool to actually swimming laps, and from watching a spin class to actually taking part in one. Now, at week 19 of my training, I can run 4,000 meters as opposed to 10m; my swimming has improved to where I can complete the 1.8km run without a break; and I can cycle for 40km without much fuss.

There is still a way to go, but now I am wondering, “How long will it take me?”, rather than “Can I actually finish this race?”

What really made an impression on me was how much faith Darren had in me, and how much he seemed to actually know what I was capable of. He knew I would be able to take those big initial steps and keep on making them as time went on, so even before day one I had already convinced myself that to have any chance of success, I would have to take a leap of faith, trust my trainer, and put my life into his hands.

Also, the knowledge Darren has passed on to me regarding how the body deals with exercise and the effect of diets has been huge.

That’s my first piece of advice for anyone who wants to take a serious stab at improving their health and fitness. Seek the advice of a professional trainer. Without a plan and the knowledge of how to reach your goal, your training will not be focused and your time will be wasted working on the wrong things. If I had been left to my own devices, my planning for the Laguna Phuket Triathlon would have been way off the mark.

My second piece of advice would be to choose an event as a goal for yourself. A running event, triathlon or duathlon. Without a ticking clock it is just too easy to push your training aside. Remember, training is only exercise if there is no goal attached!

And last of all, take the time to learn about and choose the right equipment. I always thought every pair of running shoes was the same. How wrong I was. The shoes I began my training with were unsuitable, inhibiting my ability to even walk correctly. For the first time in my life, I spent one hour shopping… for a pair of runners.

DARREN: It was only May when Tim couldn’t run and if we had asked him to actually run that first day, he possibly could have had a heart attack within 200 meters. Now, we go out and run 400m ten times with a 200m recovery, and if you think of that from a race perspective he’s doing 6km. So this shows you the progress that has been made. He was already up to race distance last month!

We’ve already ticked off two major goals, which were making exercise and healthy eating a part of his lifestyle.

We couldn’t have bought that success when we first discussed this back in May.

The reason I mention this is that you have to really dig in and commit to training from the start, as Tim and I have done together, to really see proper results. Tim has already related the pleasant success he saw very early on in the training, but as a trainer I have to point out that every step, big or small, was down to dedication and sticking to a plan.

It’s possible, no matter how unbelievable.

That’s all for now, but we’re about to enter the final stretch so check back for an update – only in the Phuket Gazette, who are enthusiastically supporting this project.