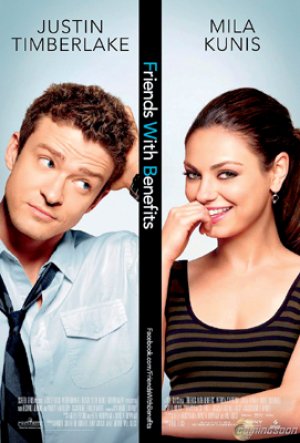 PHUKET: Friends with Benefits will appeal especially to those who have lived or would like to live under the circumstances implied by its title.

You can almost hear the echoes of Harry Burns from 1989’s When Harry Met Sally cautioning, “Men and women can’t be friends because the sex part always gets in the way.”

Thankfully for showbiz, the young crowd doesn’t heed the wisdom of their elders, so superstar hotties like Justin Timberlake and Mila Kunis get to star in a film in which their characters try to have sex without any emotional attachment.

Never mind that the story itself is almost perfectly predictable from its title alone – it ends up being one of the better romantic comedies offered this year. It starts off fast, builds its characters with surprising insight, has a great soundtrack, and showcases two extremely attractive actors for 90 minutes of raunchy comedy and near-nude sex scenes.

It’s a film about the “emotionally unavailable”, a term that the characters themselves use within the first two minutes and keep as the thematic core throughout. To keep the film light and entertaining, the characters are otherwise satisfied with their lives – both have very lucrative jobs (considering the time and setting) and bubbly personalities.

Those two qualities alone make the movie an appealing form of escape – Friends with Benefits is stress-free entertainment that makes no effort to make any social or political commentary. Sometimes, that’s exactly what people need when they go to the movies.

Intellectuals might be upset, but hey, they aren’t breaking down the door to see JT and the hot girl from That 70s Show discover they have what it takes to be sex fiends.

Dylan (Timberlake) and Jamie (Kunis) are both twenty-somethings who get dumped so frequently that it has become somewhat of a ritual. They aren’t down on their luck with the opposite sex – as they’re both too good looking to ever have trouble picking someone up – but they swear off the emotional side of relationships. This leaves room for emotionless sex – so long as they can each find someone who shares the same sentiment.

The film starts off as a romantic comedy for those with attention deficit hyperactivity issues. Both Dylan and Jamie talk a mile a minute and have a tendency to speak first and ask questions later. To this end, director Will Gluck made a clever move – he shot and edited the film to almost perfectly parallel the characters’ personalities. The scenes roll in at just a couple minutes apiece and never let any single moment last more than a few seconds – that is, until the central relationship becomes a bit more serious and a conflict starts to develop.

Under the guise of two people who “just want to work and [fornicate] – like George Clooney,” the film slowly sneaks in an emotional undercurrent that makes it worthwhile. Like most romantic comedies, the playful vices that initially attract the characters to each other end up causing a conflict that forces them to expose their insecurities.

Yes, it’s been done in a thousand romantic comedies before it – but though formulaic it may be, its characters are still witty and sincere enough to keep things entertaining.

Justin Timberlake has come a long way since he was plastered on 12-year-old girls’ bedroom doors with his heels up in the air alongside the rest of his NSync buddies. Now he’s the guy who brought “sexy back” just before launching a film career that is surprisingly solid. He has yet to branch out to very diverse roles, but more importantly he’s only had one or two bad movies, which is appalling for a star making the music-to-movies transition.

Mila Kunis has taken her career from supporting sitcom star to a leading Hollywood actress, thanks to a mix of smart decisions that keep her in the mainstream limelight as well as in critical favor. Her most recent performance in Black Swan earned her a Golden Globe nomination and was her first significant dramatic role that proved she’s got talent to go with beauty.

The third act of the film is when the story and the characters set themselves apart from average “rom-coms”. The film makes no effort to avoid romantic comedy clichés, but instead chooses to unapologetically embrace them. This self-awareness permits a completely over-the-top final act that is so shameless that it ends up being far more unique than one would expect.

If you’re in need of a solid date movie, go see this flick.

Riding works of art in Phuket