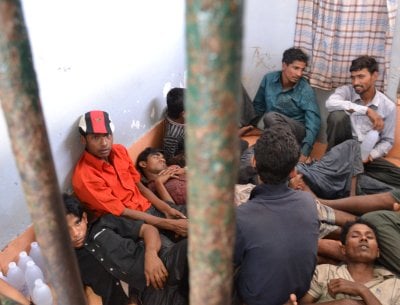 The UNHCR hopes to determine where the men come from, what their protection needs may be, and whether or not they are seeking refugee status.

Originally, 68 men were detained in Phuket after their boat landed in Rawai on January 31.

Thirty five of them were transferred to the Phang Nga Immigration Detention Center (IDC) on February 7, Phuket Immigration Superintendent Panuwat Ruamrak said (see Feb 12 issue of the Phuket Gazette, ‘Where have the Rohingya gone?’).

A group of four people, one of which confirmed to the Gazette that he was representing the UNHCR, was given access to the Rohingya detainees at about 8:15am today.

The UNHCR representative said that he was unable to comment any further on their visit.

The group spoke with the men until nearly 10am and was then led from the IDC by Superintendent Panuwat to his office.

An independent source told the Gazette that the group were traveling onward today to the Phang Nga IDC, where they hope to speak with the 35 men in detention there.

In an interview with the Gazette last week, the 33 Rohingya in detention at the Phuket IDC said that they are happier to be detained in Phuket than they would be in their native Burma.