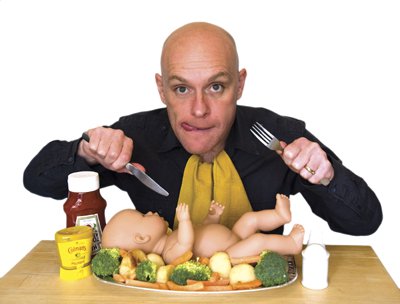 PHUKET: Seasoned stand-up comedians Eddy Brimson, Mickey Hutton and Marcus Ryan are in town for one night of no-holds barred, stand-up comedy at the Holiday Inn, Patong on Wednesday, October 24 at 8pm. This latest onslaught of close-to-the-funny-bone humor features the very best of the UK comedy circuit, namely:

Mickey Hutton
Newcastle-born comedian Mickey Hutton has performed all over the world in venues as far apart as the Falklands Islands, Shanghai, Jakarta and Mumbai. He has directed and written for television, as well as appearing in front of the camera for shows as diverse as Spender, Hearts of Gold, Hangar 17, The Royal Variety Show, Monarch Of The Glen and Crocodile Shoes. Mickey had a regular column in The Sun and his debut novel, Massive got fantastic reviews.

He still treads the boards as an actor and was recently in John Godber’s award winning play, Bouncers. Now he is writing his second novel and is a regular compére at the Comedy Store in London.”Mickey Hutton is hilarious, cheeky and irreverent. I love him,”says Judy McGuire of Sunday Magazine.

Marcus Ryan
Perennial globetrotter Marcus Ryan is a gifted storyteller with a natural comic bent and has been featured at so many festivals and clubs it’s hard to know where home is these days. One thing’s for sure, he’s right at home on stage.

A laid back yet engaging stage presence, Marcus charms his audiences with tales from the road and a sharp wit. He has written for radio, television and stage. His comedy stylings have been featured at both the Edinburgh Comedy Festival and Montreal’s Just For Laughs. As an MC he has performed in Australia, USA, Canada, Belgium, Holland, Spain, Guatemala, Ireland and UK.

“Marcus Ryan came with a well-honed act, good, solid, funny stuff delivered with a great deal of personality,” says the Edinburgh Evening News in April of 2009.

“His free-flowing delivery and exceptional take on standard stand-up material is worth catching at any time.”