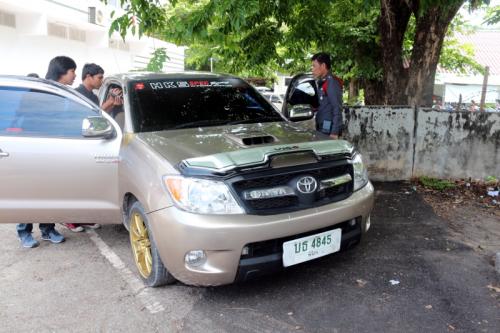 PHUKET: A motorbike stolen by a hatchet-wielding man on the run was found yesterday parked at the Koh Kaew Post Office.

The man, thought to be dangerous, is still at large.

Police first encountered the man when they signaled him to pull over at a checkpoint in Cherng Talay on Thursday. He refused to stop, almost hitting a police officer as he drove off, explained Maj Kritsana Jannit of the Phuket City Police.

“Police shot out the back tyre of the pickup truck the suspect was driving, but he still managed to escape,” Maj Kritsana said.

“The man left the vehicle and went to buy food at a nearby restaurant. We asked to search him and his vehicle,” Maj Kritsana explained.

Instead of submitting to the police’s request, the barefooted man fled, wearing only jeans. Police noted that he had a large tattoo on his back, believed to be an image of a dragon.

“We gave chase as the man ran into a worker’s camp. There he grabbed a hatchet and told us to stop chasing him, before climbing the wall at the back of the camp,” Maj Kritsana said.

At that moment, Oranee Chaisiri was passing the camp on her motorbike.

“The man threatened Ms Oranee with the hatchet, took her motorbike and drove off,” Maj Kritsana explained.

“We are still searching for him. We have notified every police station in Phuket, as well as police in Krabi and Phang Nga,” Phuket City Police chief Col Sermphan Sirikong told the Phuket Gazette this morning.

Reaching out for that helping hand