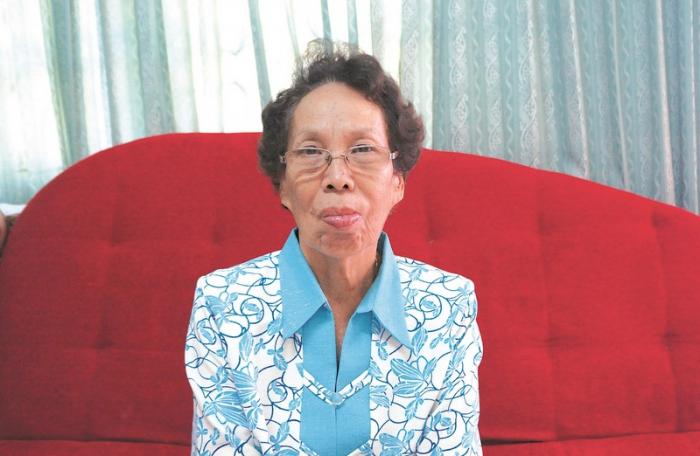 Suksan Promthong, 68, travelled to Bangkok for the ceremony, where HRH Princess Somsavali graciously presented awards to her and other winners. The awards were part of an annual event to honor Her Majesty Queen Sirikit on her 84th birthday, which is being celebrated as National Mother’s Day nationwide today.

The National Council on Social Welfare of Thailand (NCSWT) is the main organizer of tribute-paying activities for HM the Queen. The National Mother’s Day event is now in its 40th year.

The ‘Outstanding Mother Award’ is presented to recognize and honor outstanding contributions by mothers toward their children.

“I worked very hard to raise my three sons by myself. The best thing I could give them is education. Money comes and goes, but knowledge will always help them. It does not matter how much trouble I had to go through for my children – I was willing to do so,” said Ms Suksan.

Ms Suksan mainly made a living by selling food and dessert on her motorcycle around Phuket Town. In her spare time, she did housework for her neighbors for a small amount of compensation.

She did this for 20 years, until all three of her sons had graduated. She only stopped working after her sons begged her to do so, as they had all settled down in their own lives and could afford to take care of her.

“It’s not easy to raise your children to be good people. You have to be a good role model and strike a balance between empathy and discipline. I showed them how hard I worked to raise them all, selling food everyday for years and years, come rain or shine,” she said.

“All I asked of them was to be good boys. They have fulfilled my wishes and made me immensely proud. They worked as laborers during school holidays in order to save up money for their own education. At the end of the school break, they would give their savings to me. They even used to take their own lunch to school, as they knew our family could not afford to spend a lot of money.”

Ms Suksan has also been working with the Phuket Red Cross since 1997, and says she loves doing volunteer work to help people.

Ajarn A and his ‘magical’ tattoos