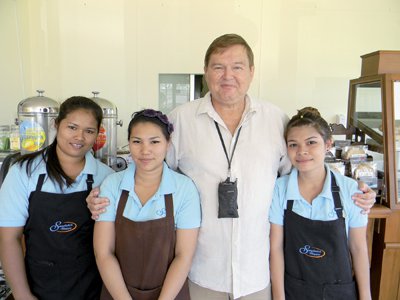 PHUKET: Good news that big projects on Phuket are finally getting government attention. These include a light rail track from the airport and a mountain tunnel through to Patong with plans for overpasses and underpasses to move traffic along the Bypass Road.

However, plans for solving traffic congestion at Chalong Circle where thousands of Thais and expats from Rawai and Nai Harn get trapped each day attempting to get to work or get home seem non-existent.

Chalong Circle is the island’s most congested traffic bottleneck, funneling construction trucks, tourists’ minivans, cars, bicycles and motorbikes coming from Kata, Phuket City and all points south of the island. Chalong traffic police handle the daily dilemma by placing brightly colored traffic cones in the midst of the chaos to channel the peak travel time’s increase in vehicle numbers through this choke point.

The future for commuters looks more disheartening with recent growth and development in the area. Just north of the Chalong police station, an area has been cleared that used to be A-One grocery store and Baan Kanom bakery with a large tyre factory next door. They have been bulldozed and plans for 300 local vendor shopping stalls with parking for tour buses are in the process of being built.

Chalong has traditionally been home to long term expats, many of whom retired to the south of the island almost 20 years ago long before upscale developments were considered up north. The area around and south of Chalong was where the more affordable housing and restaurants could be found. Much of that is changing.

The Yoothim family has been great friends of Chalong’s expat community. They own much of the land and many businesses near Chalong Circle on the road to Kata. They opened their KL Mart in 1988 to service the growing number of foreigners who were settling in the area. Their business thrived and by 1996 they had expanded their store to over 1,000 square meters with 21 guest rooms on an upper level. They imported cheese and butter and wine, commodities that were hard to find on Phuket back then. Most recently, with the opening of the many Super Cheap mini-stores in the area, they’ve had to close their doors and hope they can find a tenant for their massive edifice.

Further up the road is Rungnapa Supermarket, the fun center for local Thais and late night expats who gather when most have already found slumber. A lively center that sold everything from bug spray to any kind of alcohol, late night drinkers, just off from a late shift at a five star resort, could be found swapping stories with their colleagues while the farang contingent were in competition to see who could drink the most beer before dawn. Now Rungnapa is broken and in ruin, another victim of the nearby Tesco-Lotus and Tops invasion.

But not all is grim in Chalong. Villa Market at Home Pro Village is the upscale destination for foreigners from all over the island willing to pay high prices to pretend they are back in Western civilization.

Another success story is Julapan Stationary, where expats eagerly await to buy their weekly Phuket Gazette. Chanok and Jularat Karndee opened their stationary store in 1995 when there were still rice fields in Chalong. The land belonged to the family. Chanok had been working on Koh Samui, but wanted to return to Phuket and he convinced his family to open Chalong’s first stationary store. It has grown to be so successful that he has expanded and built a 28-room hotel as part of Jula Place. This boutique hotel probably has Chalong’s most exciting architecture having looked at many proposals before deciding to build his hotel with a wonderful futuristic look.

Chalong is home to one of the most glamorous dining destinations on Phuket. The new Vset restaurant, presided over by Chef Ronnie Macuja, sets the bar for beautiful food and setting at Chalong Bay. And not too far away is the new location for Woody Leonhard’s popular cafe and computer training center at the recently opened Fisherman’s Way Business Center where peanut butter lovers can buy Woody’s latest product, a natural delicious tasting peanut butter that he is producing from organic peanuts grown in the north of Thailand.

“I can’t seem to stop myself from creating new projects,” he smiles.

There is no good news about a plan to solve the traffic problems at Chalong Circle, but there is light even without confirmation of a new tunnel.

Phuket Lifestyle: Into the Live and Present Moment