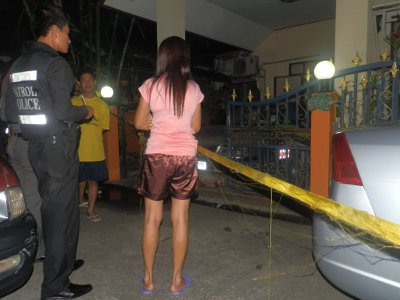 Thalang Police were at 12:20am notified of two explosions in the Bo Din housing estate, located near the TOT office on Ban Don Road in Thepkrasattri Village 1.

In the gated car park of house 310/74, the presumed target, they found a car with shattered windows. More shards of glass were found near the front door of the house, where glass from one of two empty aquariums shattered.

Initial investigation revealed that one man, injured in the bombing, was rushed to hospital for emergency treatment, presumably by a friend and not by an ambulance.

However, initial police efforts to contact local hospitals, to check on the man’s condition and question him have thus far proved fruitless.

From an examination of the bloodstains at the scene, police suspect that he may have suffered only minor injury and gone into hiding.

Initial questioning of witnesses revealed that a pickup truck circled past the home twice before the bomber lobbed two bombs into the residence.

One missed the target, landing in the carport of the adjacent unit, where it killed a small pet dog.

Police presume the bombs were homemade gasoline bombs, as the smell of petrol was thick in the area.

A group of about 10 neighbors who assembled at the scene told rescue workers that the sole occupant of house 310/74 was a single man, who did not spend much time there. Nobody knew his name.

The neighbor who lost her dog in the bombing said she had long feared trouble from the home which, when occupied, was frequently the site of visits by unknown youths.

Police at the scene would neither confirm nor deny the neighbors’ rumors that the victim had once served time for a drug conviction, a rescue worker said.