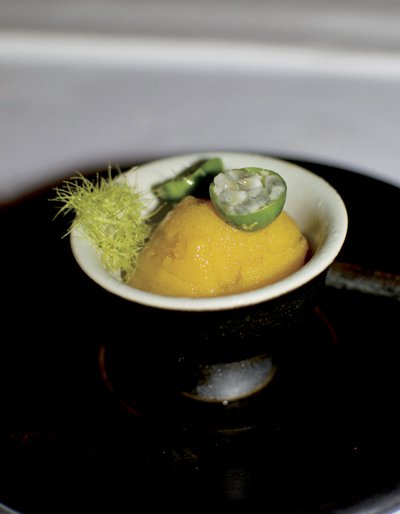 PHUKET: Picture Phuket in 1785 (called Thalang then) when most of the island was still covered in virgin rain forest. Local people lived off the bounty of the nearby forests – roots, vines, leaves, barks, fruits, and seeds – and fresh seafood from the Andaman sea.

At the time, when synthetic medicine was unheard off, people believed in the healing power of plants. Local culinary wisdom abounded and food was prepared not only to nourish the body but also to cure ills.

This is the philosophy that forms the basis of the dinner we are about to sample. Dishes, we are told, are prepared by chef Premchit Prateep Na Thalang, following recipes handed down by generations of chefs and herbalists who had been suffusing and dispensing medicinal plants to the community for decades.

Only a few days before the dinner, guests were informed by email of the venue, which this time is the Sala Phuket Resorts and Spa on Mai Khao Beach, north of Phuket. The guest list and the menu were not revealed.

On the day, as welcomed guests gather on the beach front bar, waiters file in bearing aperitifs and canapes. A tangy juice made from wild mafai (a kind of Thai plum) and passion fruit sets the tone for a series of canapes made up of herbs, fruits, and spices collected from the Phang Nga forest only a few days earlier.

Take the exotic Andaman Prawn with Lemon grass Curry and Cumin Leaf with turmeric, kaffir lime leaf and fenugreek seed, for example. The long list of ingredients surprisingly results in a few bite-sized canapes with a mixture of pungent aromas vying for dominance. The brain racks furiously for a known catalog of scents but to no avail.

Norman Jones, co-founder of Na Thalang Ancestral Siamese Cuisine and our host tonight, explains: “The use of many strong medicinal herbs in one dish is not uncommon in southern cuisine. These herbs have a known cleansing effect on the body.”

Aperitifs come in a form of ya dong, a stiff liquor made from rice wine steeped with herbs and flowers (considered medicinal in their own right).

Ya Dong tinctures can take months to mature. As female guests sip hormone-balancing and anti-aging concoctions, the men enjoy a cocktail known for increasing virility and longevity.

Eventually, we leave the bar, a little light-headed thanks to the ya dong, and are led to a clearing under a canopy of two arching trees.

What follows is a series (eight to be exact) of entrees, featuring the wildest of edible fruits, leaves and roots, concocted, cooked and combined to challenge the most jaded of taste buds, and touch the senses in many different ways.

Most dishes are fresh, light but also playful in textures and clever in the combination of flavors, as exemplified in the chef’s signature dish ‘Lobster with Fiddlehead Fern Salad with Wild Horse Mango Fruit, sprinkled with roast and grated coconut’.

Chef Premchit appears with the first entree. An attractive lady with large expressive eyes, she delights the guests with tales of her fondest childhood memories: days spent foraging wild plants with her herbalist father in Phang Nga’s forests.

All entrees are paired with four wines, ranging from the very light and sweet Pinot Grigio, served with the herby lime soup in cucumber cup, to the fuller-bodied Merlot which beautifully compliments the aromatic ‘Curry of Grey Bolete Mushrooms and Wild Jengkol Seed.’

The dinner comes to a delightful end with three beautifully presented desserts of wild fruits, fruit sorbet, and sticky rice in coconut cream.

To clean the palette and aid digestion we happily chew on slivers of pickled wild nutmeg fruits and let the lingering sweet, spicy, and sour tang dissolve in our mouth. Black Assam tea rounds up this delightful experience.

Due to the secret nature of the event, guests are asked to keep the information on the rest of menu to themselves.

I can reveal one thing though: there is a chance to sample the delicious batter-fried sand fleas (yes), from the nearby coast.

Phuket Lifestyle: Hanging out at the Monkeypod