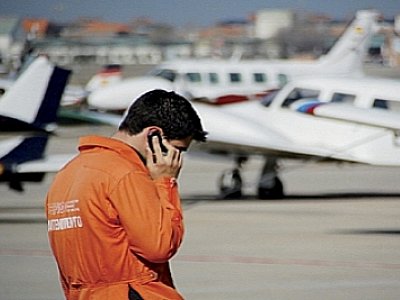 PHUKET: Your aircraft has just landed at Phuket International Airport and out comes the ubiquitous mobile phone, despite the flight crew asking you to keep it switched off until the plane arrives at the gate, because of concerns it may interfere with the aircraft’s avionics, thus endangering all on board.

A familiar scene to everyone arriving on Phuket and particularly in Asia where the leap to connect to the outside world after an hour [such as Bangkok to Phuket], or several hours of enforced non-texting and conversation seems to be an overwhelming urge of life saving proportions.

Dozens of cell phones inevitably light up before the planes has finished taxiing to the gate at Phuket Airport.

Well you ain’t seen nothing yet because the inevitable has arrived – not yet in Thailand – but it will come eventually because of competitive forces.

Mobile phone conversations in flight are feasible, legal and are being introduced by some airlines.

Virgin Atlantic announced in May it will allow inflight personal phone calls, following other airlines such as Malaysia, Emirates and Oman Air.

European airlines like British Airways and Lufthansa are already well down the track.

THAI Airways has not yet announced if it will follow suit, but with the imminent arrival into its fleet of the giant Airbus A380 and the expectations of first and business class passengers on the A380 and on other new aircraft on order, it seems inevitable that THAI will eventually allow inflight calls, if only to remain competitive.

Of course this “advance” in technology and customer service will not be welcomed by all and sundry.

You can imagine some of the conversations: “Do they speak English in Thailand?”, “Kim Kardashian is dating/marrying/divorcing who?”, “This guy I am sitting next to is so creepy and gross. I think he’s recording my conversation.” And so on.

How is this now possible? In short the creation of shielded mini-networks, or picocells, installed in the cabin above the heads of passengers have mitigated concerns over mobile phone use in flight because the calls go over a protected network and do not go bounding off multiple phone towers on the ground.

The picocells act as tiny GPRS cell towers on the plane. Because they are so close to the passengers, mobile phones will only have to emit relatively modest signals because they won’t have to work as hard to secure a network “handshake.” This helps ease concerns over interference with aircraft navigational equipment.

The European Union gave permission to do inflight mobile calls in 2008, but a combination of factors, such as objections from other passengers, the expense of incurring international roaming charges and lingering concerns about safety all held the airlines back, and still do in many cases.

Theoretically, before the introduction of picocells, electromagnetic interference of the aircraft systems was the most common argument against using electronic devices on planes, such as mobile phones, small walkie-talkies or even radio-controlled toys.

However, many aviation experts have long decried this theory. In fact Boeing, one of the two largest airline manufacturers, undertook a test in response to reports by flight crews that they detected “anomalies” caused by electronic devices. Boeing found there was no “definite correlation between electronic devices and the associated reported airplane anomalies.”

Despite the availability of inflight mobile phone calls, use of them is not likely to be widespread, at least not in the short term until the high cost of making a call comes down.

As one commentator said: “The chances are slim you’ll be stuck with someone blabbing away on your next flight. Unless, of course, you are sitting next to someone with a story to tell and money to burn.”