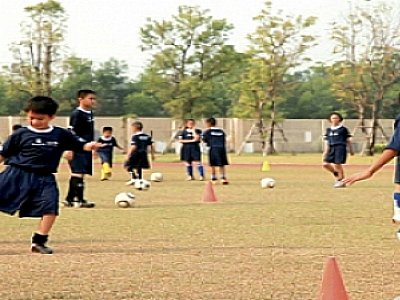 PHUKET: All profitable and respectable organizations will eventually need to consider giving back to the communities from which their financial prosperity derives.

Implementing meaningful Corporate Social Responsibility (CSR) is one effective way for firms to initiate positive social changes and enrich the corporate-communal landscape for the greater good of business and society.

With so many pressing issues in society, deciding which are the most deserving of hard-earned corporate capital is difficult.

But for Sansiri Plc, one of Thailand’s leading premium property developers, and no stranger to Phuket, CSR is a no-brainer.

Speaking exclusively with the Phuket Gazette last week at Sansiri’s headquarters in central Bangkok, President Srettha Thavisin said that children are at the top of the firm’s CSR agenda, or what Sansiri calls “Social Change”.

Sansiri’s Social Change is a new approach to CSR which emphasizes the full commitment of a business organization in planning and implementing CSR programs in an inclusive, long-term and sustainable way.

The president, also the firm’s Social Change spokesperson, said that Sansiri this year has earmarked 60 million baht (approx US$ 2 million) to maintain and further develop its Social Change programs nationwide.

“We administer half of this in house, and the other half (US$ 1 million) is donated to our Social Change partner, the United Nations Children’s Fund (UNICEF), as part of a three-year Memorandum of Understanding,” he said.

Mr Srettha said that the company is looking to expand its Social Change portfolio with projects in Phuket which could break ground as early as the end of this year.

“This depends mostly on our sales volume. We are still monitoring the Phuket market and planning to launch several more development projects there later this year. We will wait until we have a sufficient client base.

“Our Social Change initiatives are conducted at both the national policy and local grassroots levels, he said.

As for prospective Social Change projects in Phuket, Sansiri is looking to establish one of its free football academies.

“I am a personal friend of FC Consultant Paitoon ‘Ko Men’ Chutimakornkul, and follow Phuket football developments,” he said.

The company has established five football academies in Bangkok, the first which was set up in 2006

“When we open a new one, we will publicize the opening so that our clients are aware. However, participation is not strictly limited to our clients and many of the kids are underprivileged from low income families. It’s on a first come, first served basis,” he said.

“All academies are free and we provide all the equipment and gear for the kids who attend regularly, but we realize that there are organizations that make good business by running sports academies. It is not our intention to clash with them since we are doing this as a part of our Social Change initiatives, CSR,” he added.

To avoid clashing with those businesses, the company sets a different schedule.

“Sports academy businesses tend to run later in the day, so we open in the early morning instead. Most rich kids prefer not to wake up early,” he said.

Another service of its academies is providing employment to former national squad players as staff and coaches.

“After serving the country for the national team, not all of these players end up becoming coaches or sports writers with prosperous careers.

“Often, they don’t end up doing well and some even end up on the street.

Giving them an opportunity to make a little income is another small way of helping those who have contributed to the country,” Mr Srettha explained.

The last-but-not-least of Sansiri’s Social Change pillars is education.

Mr Srettha explained that there are about 750,000 school aged children in Thailand who are not in school.

One of the main obstructions is that a lot of these kids lack the proper birth registration documents, and thus cannot access free schooling.

“If the child was born in Thailand, then they have the right to be educated here. The government cannot and should not deny them this right.

“If these kids don’t have documents from birth and don’t get educated, they will end up becoming a social burden somewhere down the road.

“We want the Phuket Governor to be tough on child labor,” he said, adding that Sansiri is also working with the Ministry of Interior to advise on policy.

“If kids can get the proper birth registration documents, they will be able to access free schooling. It should be automatic,” he said.

This is not the first time Sansiri has taken the lead to influence government policy.

Its “Iodine Please” campaign actively raised awareness about the correlation between low IQs and Iodine deficiency disorders in Thai children.

Implemented together with UNICEF and the Ministry of Health from 2009, the campaign resulted in the Abhisit-led government passing a Universal Salt Iodization regulation in January 2011.

For its part, Sansiri was awarded ‘Best CSR Practice’ across Southeast Asia in 2011 by the Asia Responsible Entrepreneurship Awards.

Asked about the key element of Sansiri’s successful Social Change program, Mr Srettha said: “It’s important that you align yourself with the right organizations. We’ve partnered with UNICEF because it is one of the most transparent organizations.

“We have no control over what they do with the money that we donate to them, but we trust their judgment, and they advise us on issues, likewise,” he said.

Phuket lifestyle: Lions Club of Phuket Pearl to present ‘A Ray of Hope’