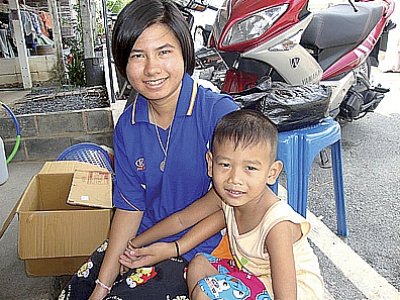 PHUKET: The Lions Club of Phuket Pearl probably support a wider number of local charities than anyone else. Founded in 1991, the original members were women who called themselves the Lionesses of Phuket until they received permission from the International Lions Club that they too could be Lions. Now they have invited men to join them.

“We formed the Lions Club as a group of women who wanted to contribute to the welfare of the less fortunate on Phuket. We did not want to be a social club, but one that would be of service to those who do not benefit from the healthy local economy,” states founding member Adrienne Tusoni.

Their motto is ‘We Serve’. And serve they do. Over the past 20 years, the Lions Club of Phuket Pearl have sponsored and supported many worthwhile projects including the Phuket Association of the Disabled. Dr Siripon Seewatanakul, another founding member, has practiced paediatric medicine on Phuket for 29 years. She was the founding chairperson for the Association for the Disabled.

“There are over a thousand disabled people registered on the island as having disabilities which prevent them from working. At one time we renovated a government building to provide training such as massage for the blind and computer training for the hearing impaired. The Lions Club of Phuket Pearl provides valuable assistance to keep these programs in operation.”

Another program supported by the club is therapy for the more than 200 registered autistic people. The club has provided time in a hyperbaric chamber at Vachira Hospital that has allowed a young Thai student to function in school.

“The therapy in the hyperbaric chamber has been impressive but expensive. We have been able to help a four-year-old boy who required 40 hours of therapy at 1,300 Baht an hour. And we have over 200 autistic children in need,” Dr Siriporn continued. The club has also been a big supporter of Phuket’s Sunshine Village which helps underprivileged children and those who lost family during the 2004 tsunami.

Dr Supaluck Kanchanamethakul, an active supporter of programs to help children, is also a member and a founder of Childwatch which provides protection for all children at risk regardless of nationality.

The fund raising chairman and membership director of Lions Club Phuket Pearl, Esmeralda Paya, can most often be found at her Dream Gallery at the Boat Lagoon. But she spends much of her time planning fund raising events for the club.

“This year we will have a fun event on March 24 at the Royal Phuket Marina. Starting at 7pm, we are inviting the community to an evening of Thai culture with a fashion show of traditional Ya Ya dresses, zumba dancing, a performance by children from the Phuket Sunshine Village, a live jazz band and beautiful food and drink. It will all be happening on the boardwalk where guests can bid on hotel stays and wonderful gifts in a silent auction,” Esmeralda explained.

The Phuket Gazette is a sponsor of the Lions Club Phuket Pearl event at the Royal Phuket Marina.