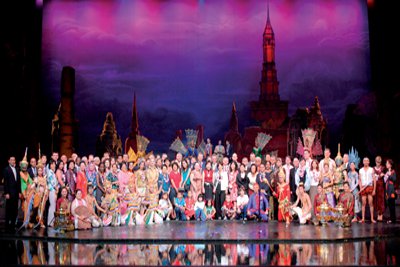 PHUKET: For anyone interested in the cultural diversity and complex history of Thailand, an evening at the new Siam Niramit complex on the by-pass road, near Phuket Town, will be an enlightening and enjoyable experience.

There are three different attractions to be seen. At the entrance, a Thai temple fair is being built around the popular crafts and games played within the country including dunking-the-maiden-in-the barrel-of-water, a standard amusement in all small village festivals. There are displays of martial arts and the various examples of Thai dance. Nearby is the entrance to the Thai Village which is an enchanting visit to how rural people worked and lived their daily lives in a quieter and less frantic era.

The Thai Village stretches over an enormous area filled with floating markets on man-made lakes and demonstrations of Thai crafts such as weaving, batik painting, and cooking set around authentic architectural models of housing styles found around the country. The Village is softly lit as by torch which would have been the only way possible before the Thais discovered their love of the fluorescent light tube. It’s a very charming experience wandering about this village where the vendors gently offer their products including original and powerful recipes for Thai whiskey, lao khao, the liquor preferred by Thai farmers and laborers.

I would have happily spent my evening in the Thai village as it was so interesting and enjoyable, but the announcement that the spectacular main stage show at Siam Niramit was about to begin drew me along the canals and by the large lake into their massive theater.

The show is divided into sections. The first concerns the different history and lifestyles between Thailand’s four regions. Another section is a visual demonstration of the three options that wait in the afterlife depending upon one’s behavior and karma. The last section is a joyous celebration of popular Thai festivals. At the end, one could only feel happy to be in such a wonderful place as Thailand.

It was a total pleasure to just sit back in the comfortable cushioned theater chair and let the beauty of the various cultural scenes wash over the senses. There are over 100 set pieces, 150 cast members wearing 500 costumes during this extravaganza.

Some of the more startling scenes from the show include a charming underwater panorama that looks like the world’s biggest aquarium, a river that flows across the stage with floating boats, and soaring Thai angels who fly through the air in the sequence about Thai heaven.

The 80 minute show was stunning and far exceeded any expectations or preconceptions I may have had about a Thai cultural show. I’ve seen a lot of them in my 20 years living in Thailand, but the Siam Niramit show is an experience far above what is normally presented. This is due to the attention to detail and substantial investment in costume design, sets and lighting.

The show’s magic is enhanced with the handiwork of John A. Williams, the world famous Hong Kong based lighting designer whose clever use of color gives the production depth and continual interest.

The production team at Siam Niramit Phuket has built sets that look like gorgeous paintings. They have spent a lot in making this show spectacular and one that will inspire people to return to have another unforgettable evening.

Phuket Lifestyle: The Yankees are coming!