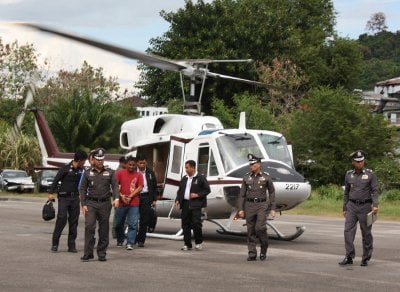 PHUKET: The man who Phuket Police have arrested for conspiracy to commit murder in the case of Wisut “Ae Inside” Tangwitthayaporn, today publicly denied any involvement in the killing.

Noppadol “Pae” Praisri, 43, this afternoon told the press gathered at Phuket City Police Station that he used to come down to Phuket to sell fruit, but that that was years ago.

“Right now I am a minibus driver between Cha-am and Bangkok,” said Noppadol.

“I am not guilty. I want the chance to prove my innocence in court,” he told the press.

The press conference was staged at the behest of Provincial Police Region 8 Commissioner Lt Gen Santi Pensute, who personally accompanied the team of officers who transported Noppadol from Surat Thani to Phuket by helicopter this afternoon.

“After questioning by police, he signed a confession stating that he was hired by a ‘Mr Boy’ for 50,000 baht. He then joined with Sanya Klinchum, who sat on the back of the motorbike [driven by Noppadol] and used a 9mm gun to shoot Mr Wisut,” he said.

Police Region 8 Deputy Commander Maj Gen Pisan Chuldilok said his officers will further question Noppadol so that they may file for an arrest warrant for Sanya and any other people involved in the murder.

Maj Gen Pisan today also confirmed that police were no longer pursuing illegal issuance of title deeds for land at Freedom Beach and Nakalay Point, or illegal acts by government officials in being granted transfers or promotions, as possible motives for the killing.

Mr Wisut had published stories about both issues before his assassination.

“Our investigations and the people we have questioned so far have led us to believe that these issues had nothing to do with the murder,” Maj Gen Pisan said.