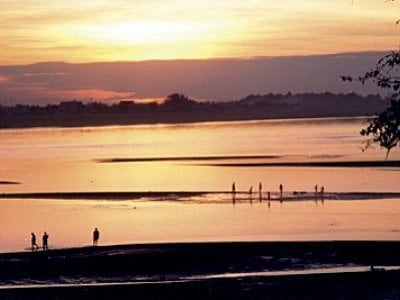 PHUKET: Tourists visiting Thailand for the first time might be forgiven for thinking that “Mekong” is nothing more than a cheap local whiskey.

But mention the word to almost any Thai national and you’ll proudly be informed that it is a mighty river. He or she might go on to say that its name means “Mother of Water”.

In a country where most rivers become stagnant or worse in the dry season, and on an island, which you can drive end to end without seeing anything grander than a stream, the mother of all Asian rivers is truly a marvel. Consider its size.

The river drains and enriches an area consisting of over 300,000 square miles, and when it finally enters the South China Sea, it has passed through: Tibet, China, Burma, Laos, Thailand, Cambodia and Vietnam.

Most importantly, for conservationists, it is second only to the Brazil’s Amazon river as the most ecologically diverse river system in the world.

It is home to not one, but three of the largest freshwater fish in the world: the giant barb (probarbus jullieni, a variety of carp), the freshwater stingray (himantura chaophraya) and the giant catfish ( pangasianodon gigas).

One catfish recently caught by net, weighed 646 pounds, and may well be the largest freshwater fish recorded in recent times. Even the Amazonian behemoth the arapaima, and the giant carp of the Nile, cannot match its sheer bulk.

The Mekong has its own species of freshwater dolphin (the Irrawaddy dolphin), and even an indigenous crocodile (crocodylus Siamensis), which is found in the lower reaches of the river.

The aquatic biodiversity of the Mekong is staggering, taken hectare by hectare, it is the richest in the world. A veritable treasure-trove. It is conservatively estimated – and new species are being discovered every year – that there are 20,000 plant species, 430 mammals, 1,200 birds, 800 reptiles and amphibians, and 850 varieties of fish in the Upper and Lower Mekong basins.

Because the river has so many different aspects, it can support not only so-called “black fish” (such as catfish), which inhabit the slow-moving, shallow reaches where oxygen is in short supply, but also “whitefish”, which are found mainly in the upper basin where the current flows quickly through rapids, gorges and waterfalls.

Sadly, like most treasure-troves, the river has been raided so often and so remorselessly that many of its riches have become seriously depleted – in some cases to the point of extinction.

Most of the aquatic creatures listed above are in serious decline: the Irrawaddy dolphin, once common everywhere, is now close to extirpation, and large specimens of giant Mekong fish are now rarely seen or landed.

The melancholy list of threatened species is endless, and is not just confined to fish. Cantors’ soft-shell turtle is now found only in the waters of Cambodia, the Siamese crocodile in remote sections of the Laotian Mekong.

Hardly surprising, when one considers that the “Mother of Rivers” supports literally several million people, all dependent on the aquatic life of the river for their supply of protein. Greater concentrations of population, and the improved efficiency of modern fishing methods have led to overfishing along the length and breadth of the Mekong.

It isn’t a problem peculiar to this habitat… it’s worldwide. Think of the herring shoals that have vanished from the North Sea, of defunct cod fisheries off the coast of Newfoundland, of the declining Fraser River sockeye runs in British Columbia.

Many factors exacerbate problems in the Mekong, not just overfishing. The modern evil of pollution, especially toxic chemical pesticides, is one issue. Another is the buildup of sediment in the lower reaches of the river, a state of affairs caused by “slash and burn” deforestation and consequent soil erosion in the upper basin. This sediment has a damaging effect, especially in hot weather because water is shallower and more liable to overheat. Higher temperatures mean less oxygen.

It is estimated that 50 per cent of this silt is carried downstream from the Chinese section of the river where it passes through Yunnan Province. That stretch of the river is characterized by deep ravines, narrow gorges, and now arboreal depletion on a massive scale. Unfortunately, what happens to the river in one country affects everything else downstream. Rivers are not aware of political boundaries.

Globally, one cannot ignore the impacts of climate change. While opinions about its ramifications are divided, it is clear that there is a prevalence of extreme climatic conditions. In the Mekong region alone, there have been unprecedented floods and droughts.

But, the biggest villain is all too obviously – and visibly – man-made. Dam and be damned. It is already happening. The Mekong and its tributaries are traversed by major dams: four in China, nine in Laos, ten in Vietnam, seven in Thailand. 134 more are planned. Why?

Because the mother of rivers, once viewed as a larder of fresh food – constantly replenished – is now regarded as the battery of Southeast Asia. It is a potent source of that most valuable of commodities – power. These dams generate enormous volumes of mega-watts. One dam alone, the Xayaburi Dam in Laos will be 820 meters long and 32 meters high. Regarded as a key source for the generation of electricity – and money, work on the project is currently suspended – a small and perhaps ephemeral victory for environmentalists.

Proponents argue that such hydro-power is green and that its creation involves no fossil fuels or nuclear reactors. True. Furthermore, Thai politicians have argued that water channeled from such projects can provide a water grid; leading to a “greening of Isaan”.

In any case, the cost to ecosystems is incalculable. Such projects are throttling and will continue to garotte (a weapon used to strangle someone) the mother of rivers, destroying her unique biodiversity.

Dams provide barriers to riverine fish migration; they interrupt the natural sequence of water-level patterns to which fish are accustomed; they cause a hardening of the river bed downstream; they alter water temperatures, and wash away delicate plant systems.

The inevitable creation of more reservoirs is no solution. Few fish (nine species only) breed in reservoirs, and in any event, these static bodies of water can quickly become deoxygenated and algae prone.

Life at all levels of the food chain is slowly but surely ebbing away. Given time and man’s insatiable greed, the Mekong will lose its real potency. Aging prematurely, the Mother of Rivers will become barren.

Looking Back: A brief history of Thai-US relations