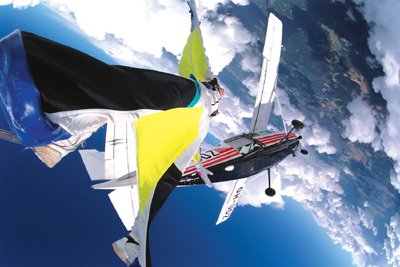 PHUKET: Finnish daredevil Jari ‘Birdman’ Kuosma will hurtle from the skies of Phuket into the waiting arms of his betrothed on Februay 25.

Jari ‘The Birdman’ Kuosma is Phuket’s own adventure action hero. He is known around the world for his sky diving talents and breathtaking exploits.

From his home country, Finland, to South America to Africa to California and Florida in the United States, Jari has been thrilling audiences with his daredevil stunts in the air. And now he has made Phuket his home.

“I’ve always been excited about skydiving, since I was a boy in Finland. My father was an amateur pilot and when we used to visit the airfields I was always watching the skies for the parachutes.”

In 1999, he decided to abandon his plans for a career in telecommunications and started up a wingsuit development company – Birdman International Ltd, continuing to spend as much of his time as possible jumping out of airplanes.

In 1993, he joined a Finnish team which broke the country’s record for the largest free-falling formation. He moved to DeLand, Florida and qualified as a professional instructor. He jumped with his clients to ensure their safety.

In 1997, while Jari was BASE (Building Antenna Span Earth) jumping in Italy, he learned of Frenchman Patrick de Gayardon who had invented a webbing system between the arms and the torso, and between the legs. The idea was to allow sky divers to actually fly and remain much longer in the air.

Working together with a parachute and jumpsuit manufacturer, the trio devised a wingsuit made from ripstop nylon, a fabric with zero porosity so the wings would remain rigid in flight. They set up their manufacturing studio in Slovenia where they made their first 80 wingsuits. And they had their challenges when introducing the suits to airfields.

“The history of jumping out of airplanes is less than a hundred years old. Between 1930 and 1961, 75 men jumped from planes wearing wingsuits made from a single layer of canvas stretched from hand to foot. Only three were known to have survived the jump. So there was a lot of skepticism about the safety of the wingsuit we developed.”

However, word spread of the new suit and soon Jari had a successful new venture to add to his credentials. He eventually returned to live in his native Helsinki where he met the ‘love of his life’.

“I must have moved back to Helsinki so I could meet my Nina. I met her seven years ago but proposed to her just five hours after we met. I knew she was the woman with whom I wanted to spend the rest of my life.”

Jari and Nina are planning to marry in a private ceremony in Phuket on February 25. And on that same date, as the finale to the White Sand / Blue Sky Air Show, Jari will don his Birdman suit and jump from an airplane to land on Surin Beach. “This will be a normal dive from 13,500 feet,” he says. “Nina has also jumped from a plane, but she’s decided that on her wedding day she’s going to keep her feet on the ground.”

It seems that Birdman knows no bounds when it comes to being in the air. He has made 5,022 jumps, on one of which he even accompanied his 76-year-old mother on her first parachute leap.

He now looks forward to further indulging his passion and his business at Phuket Airpark.

“Nina and I have settled on Phuket as we think it’s a beautiful tropical island and the perfect place to begin our married life,” he says.