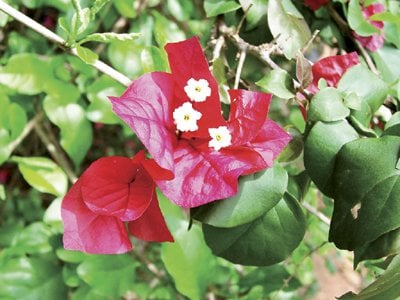 PHUKET: If you think that the ‘Phuket Gazette’ is a parochial newspaper, then have a re-think. I recently received an email from Honolulu, no less, about a piece on palms.

While the writer commended my observations about growing ferns and other epiphytes on palm trunks, he took me to task for writing about, “a very tired and overplanted group,” suitable for, “amateur gardeners and teams of poorly trained and hurried yardmen.” The writer’s letter ended by recommending a Hawaiian nursery, ‘Floribunda Palms and Exotics’, so I duly had a gander at their impressive website. But here’s the rub. Most Gazette readers in Phuket are expats whose experience of tropical gardening is necessarily limited. I was the same when I first came here. That means that, initially at least, they want rugged, easy-to-grow plants that are resilient enough for life in Phuket. In general, exotics, rare species, and newer cultivars are much more fastidious about their environment, and will need more tender loving care.

It is worth adding that Hawaii is not Phuket, sits on the Tropic of Cancer, and has a winter temperature between 16 to 29 degrees Celsius; Phuket is much nearer the equator, and is thus consistently hotter.

And as I swelter away at the computer, I am forcefully reminded that there is no real let-up. So for a while, some of the tough tropicals that flourish in Phuket’s heat are going to feature here. The more fragile exotic brethren can wait their turn.

One shrub that is rarely praised, but which copes easily with conditions here is the umbrella tree or schefflera. It is essentially a foliage shrub with glossy leaves arranged in palmate fashion like the spokes of a wheel.

The evergreen foliage grows in dense clumps, and sometimes the leaflets droop like a parasol – hence the common name of umbrella tree. It will take shady conditions and provides good cover, especially next to a wall.

In Europe it is sometimes grown as a house plant, a fact which gives an indication of its durability. In fact, I have one in a pot which sits outside in full sunlight, requires little watering, and is now about six feet wide and six feet tall.

Scheffleras can often produce unusual inflorescences – spikes of flowers which go from green to pink and finally to dark red. I say “can’ because it does not always flower, and in any case, it is the foliage and especially the variegated form which is the main attraction. In the right conditions, it can reach 10 feet in height, but it would need to be planted in open ground to achieve those dimensions.

It takes slowly from cuttings, but is, in any case, readily available in garden centers.

Unspectacular maybe, but a personal favorite.

There is nothing unspectacular about the bougainvillea. Spectabilis is even part of the botanical name. And this vine has nothing in common with the umbrella tree except that it is a survivor and will take anything Phuket can throw at it. Right now, at the end of the dry season, it is vying for visual prominence with cassias and flame trees.

Left to its own rugged devices and clinging to a tree, it can grow to forty feet or more. Placed next to a wall, it will soon cover the entire surface with its red, salmon-pink, orange or white bracts. Moreover, it looks magnificent in a pot, especially container specimens, which have several different colors grafted on to a single rootstock. For instant impact, put a row of these on your patio or balcony.

IN the days before containerization, plants were bought with bare roots, sometimes and if you were lucky – enclosed in burlap or sacking.

These plants had a lower rate of survival, but at least they only had one kind of soil to cope with. If your new plant has been soil-less for some time, soak it in a bucket of water for at least four hours.

Cut away damaged roots and position in a hole at least twice the size of the root system, which should be spread out over a cone of soil in the middle of the hole.

Carefully hold the plant upright, and backfill to the soil level. Add water to settle the roots and add a circular ridge of soil that will aid future retention.

If you are transplanting your own plants, try to preserve as much of the root system and its attendant lump of soil as possible.