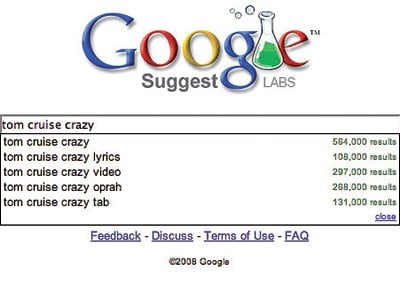 PHUKET: It is that time of year again when people look back at the year that’s been and compile lists.

Google have been doing this for the past 11 years and call their compilation of year’s most popular searches the Year-End Zeitgeist which means “the spirit of the times”.

To compile the 2011 Year-End Zeitgeist, Google will use the aggregation of billions of queries people have typed into the search engine then filter out spam and repeat queries to build lists that rank in order of the largest volume of searches.

Globally the top ten were, at number one, 13-year-old Rebecca Black who made a big splash on the internet with the release of her pop single “Friday” which went viral, receiving over 167 million views on YouTube.

Casey Anthony, a mother charged with killing her young daughter was number four while the release of Battlefield 3, a first-person shooter video game, came in at number five,

The anticipated release of the iPhone5 (which turned out to be the iPhone 4S) was number six, while British singer Adele was number seven.

At number eight a Japanese script search for TEPCO (owners of the Fukushima Daiichi power plant) were the first non-Latin term to make it to the global fastest-rising list while Apple founder the late Steve Jobs and iPad 2 placed 9th and 10th, respectively.