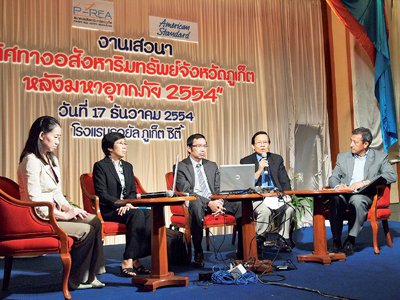 PHUKET: Following a seminar held recently, Phuket real estate developers are less worried about the impacts of the flooding in central Thailand on the construction industry supply chain.

Tanan Tanphaibul, President of the Phuket Real Estate Association, said members had worried that massive government-funded reconstruction of parts of Bangkok and the Central Plains region might have a negative impact on the building industry on Phuket by siphoning away material and labor supplies.

The members were reassured following a talk by Theerasak Svetsila, sales and service director of Siam Cement’s distribution firm SCG Network Management, who forecast a 10.8 per cent increase in construction industry revenue nationwide to over 900 billion baht, much of it led by government mega-projects.

Mr Tanan said there were still concerns of a labor shortage in the central region that could lure workers north. Many low-wage workers from Burma had fled home during the inundation and it was still unclear if and when they would return, and in what numbers.

Assoc Prof Manop Pongsathat of the Chulalongkorn University Faculty of Architecture said the floods could spur greater numbers of wealthy Bangkok residents to buy second homes in tourist destinations such as Phuket because many believe that this year’s flooding would not be the last.