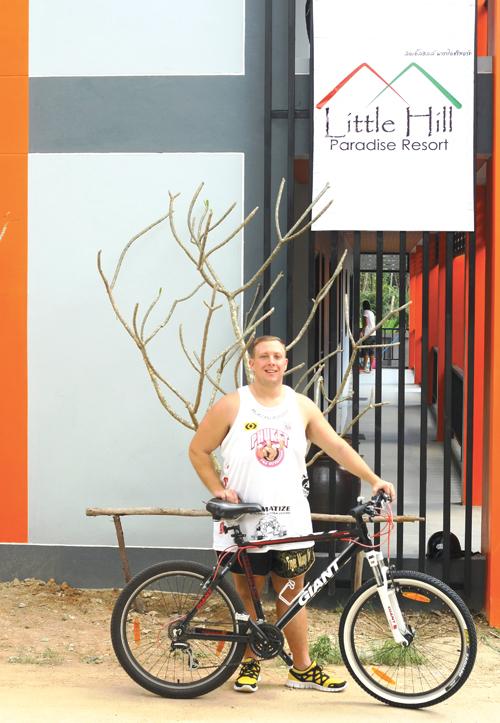 PHUKET: While a certain Mr Armstrong may have brought shame to the world of cycling following recent revelations to a certain Ms Oprah, a certain Mr Mason will be doing just the opposite by using his bicycle to help raise funds for needy children.

Tomorrow James Mason will leave Tiger Muay Thai camp in Chalong (one of his main sponsors) and cycle 890 kilometers to Rainbow House, a home for disabled or abandoned children, in Bangkok.

This is no mean feat for even the most accomplished athlete but the challenge becomes even more incredible when you consider that 18 months ago James Mason could not even mount a bicycle let alone ride it.

At that time he weighed 235 kilos and had been given five years to live by a doctor in the UK. James opted to lose the weight the hard way by joining Tiger Muay Thai and MMA to literally slug it out.

In an interview he gave to the Phuket Gazette in 2011 he was happy to announce that he had already shed ten kilos.

Fast forward to 2013 and 29-year-old James is now relatively svelte, weighs in at 99 kilos and is about to lose another few during his nine day ride to the capital.

In a recent Gazette interview at his home in the plush Little Hill Resort, jogging distance from the camp, he shrugged off any notions that this was a tough undertaking and spoke of his earlier weight loss challenge: “The hardest thing for me was hearing the comments, both here and back home, about my appearance from those who did not know what I was going through. I just blocked them out and persevered”.

If losing 138 kilos in 18 months wasn’t hard enough, James has also been beset by other medical problems.

Four months after arriving in Thailand his leg became infected with a rare flesh-eating bacteria called Necrotizing fasciitis, which is fatal in 40 per cent of cases. He was hospitalized for over two weeks and surgery was able to save his leg. It should be mentioned at this point that in the same leg he has no anterior cruciate ligament (ACL), which is a hindrance for an athlete.

When another of his sponsors, Phuket Pro Nutrition, joked that, given the amount of cycling he was doing anyway, he should consider riding to Bangkok he took it as a challenge.

“You can do anything if you put your mind to it. Many would have given up. I think of those less fortunate than me that have no arms and legs who still compete at an Olympic level,” says James.

Having succeeded in losing over half of his body weight, he now inspires other people to do the same including local DJ Tom ‘The Tank’ Somsanuk – a work in progress.

James believes that being in Thailand has made all this possible so he is now ready to give something back. The charity he has chosen, called ‘For Life’, helps disabled or abandoned children in Thailand and supports four day-care centers, a residential home for up to 50 children and a project that works with 600 children in rural communities.

He set a departure date for January 29 and started training five hours a day. But, a few days before Christmas, which he celebrated back home in the UK, James caught Dengue Fever, another potentially life threatening mosquito-borne disease.

Through sheer will power and stamina he was able to recover in three weeks and is now fighting fit and ready to roll.

He aims to cycle the 890 kilometers to Nonthaburi in nine days with stopovers roughly 100 kms apart except for the last 205 km leg from Hua Hin which he will do in one day.

His nutritionist, from Phuket Pro Nutrition, will be monitoring him from a support vehicle and other supporters will ride with him some of the way.

And, in case you were wondering how James will be returning to Phuket he will be flying back after a well-deserved rest.

The Phuket Gazette is James’s main media sponsor and will update readers on his progress both online and on PGTV’s weekly TV show ‘Phuket Today’ on TrueVisions channels 99 and 58. Other sponsors include: TKO Bike Rentals; 02 Beach Club and Lotus Medical International.

Phuket Gardening: From weird to wondrous